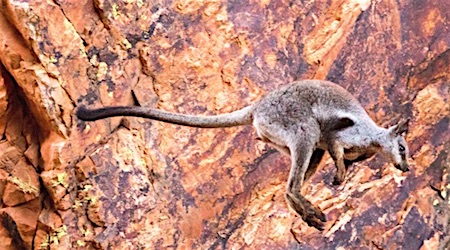 A petition has been started on an international website to call off the “Parrtjima – A Festival in Light” which is planned to be projecting images over 2.5 km of the MacDonnell Ranges near Alice Springs.

By this morning 633 signatures have been recorded. The petition is directed at Chief Minister Michael Gunner.

The petition says in part: “Mt. Gillen is home to some of the last colonies of the Federally protected Black Footed Rock Wallaby, Petrogale lateralis.

“The NT Government funded festival (23rd Sept to 3rd Oct) plans to blast cliffs where these special mammals live with lasers for a two week long light show in the name of somehow boosting tourism.

“No consideration has been given the impact of these possibly blinding lasers on the endangered animals.

“When stressed rock wallabies are known to abort foetuses and eject joeys from their pouch, meaning deaths could result. These animals have lived undisturbed on these cliffs for millennia – they should not be harmed for the sake of a frivolous festival.

“We ask the new NT Chief Minister to urgently act to prevent this happening and protect our vulnerable wildlife which is a far greater asset to the region’s tourism than an ill-concieved festival.”

The petition was started by local tour operator Mark Carter.

We are seeking comment from Tourism Central Australia and Mr Gunner.