'First authentic Indigenous light festival of its kind in the world' 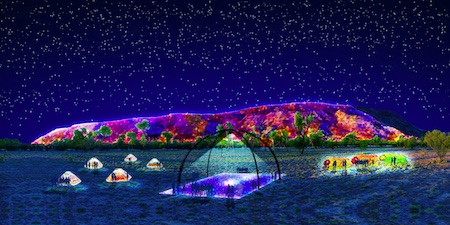 “We are extremely proud to present the first authentic Indigenous light festival of its kind in the world as we illuminate 2.5km of the Northern Territory’s majestic MacDonnell Ranges in celebration of Central Australia’s rich Aboriginal culture.”

This is how Andrew Hopper, of the NT Major Events Company, today announced the start of “Parrtjima – A Festival in Light” on September 23 for 10 days.

He says visitors can play a part in illuminating the ranges by stepping into “the interactive glass booth and take control of the panels to choose which colours you want to use to light the vast landscape, and watch your creation come to life before your eyes.

“A series of three large, light-filled caterpillar installations featuring colourful illustrations by students from Amoonguna School in Alice Springs, based on their interpretation of the Yeperenye (Caterpillar) Dreamtime story.

“The story of the Caterpillar is folklore in Central Australia, considered by the local Indigenous Arrernte community to be one of the major creation forces of Alice Springs, the heart of the Australian outback.

“Illuminated from the inside, the vibrantly lit caterpillars will be accompanied by an audio soundscape and narration by local Indigenous Elder to bring the story to life,” Mr Hopper says.

“A sequence of artworks by Indigenous artists from Alice Springs will be projected onto the desert sands with their own atmospheric soundscape.

“The projections merge art with the landscape, symbolising the return of Indigenous art to the Country – the common thread of all selected paintings.

“The series was created with curatorial assistance from Araluen Arts Centre.”