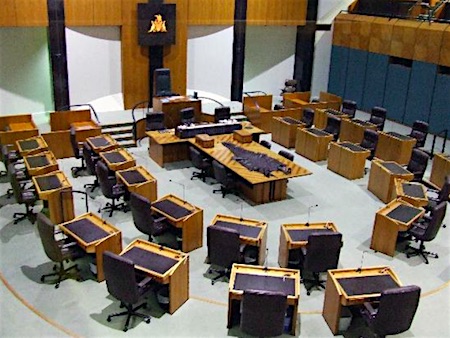 An Opposition made up of a coalition of Independents is “still possible”, says Robyn Lambley, who has been discussing this with other Independents Gerry Wood and Kezia Purich.

Advice received yesterday from the Clerk of the Legislative Assembly and from the Solicitor-General, references “convention and practice rather than law”, she says. “What we are doing is so different and left field that it doesn’t fit in with the usual practice of parliament, so we are still exploring the options.”

The Solicitor General, Sonia Brownhill SC, notes that the terms ‘Opposition’ and ‘Leader of the Opposition’ are not used in the NT’s self-government Act or regulations. The Electoral Act (NT) does not define the terms and neither do the Standing Orders of the Legislative Assembly.

The Remuneration Tribunal, governed by its own Act, does have to determine entitlements for the Leader of the Opposition but the role is not defined in that legislation either.

On the other hand, nothing is clearly determined about entitlements for Independent members in Opposition-like functions.

Ms Brownhill goes on to look at the literature on the role and history of Oppositions in Australia and other countries following the Westminster system, and says that she is unaware of any instance where an Opposition was formed by a coalition of Independents.

She says it is “difficult to envisage” that a coalition of Independents could act as an “official Opposition” given the lack of a common “reference point”, based on party ideology, policies and election platforms, that could permit “consistent cooperative action”.

On this point, Ms Lambley acknowledges the difficulty but says the only bottom line is “the need to agree wholesomely and 100% to the responsibility to hold the government accountable”.

Ms Brownhill and the Clerk, Michael Tatham, both raise the obstacle of a coalition of Independents being able to form “the alternative government”. This argument seems to be in part about numbers, which would apply as well to the decimated parliamentary presence of the CLP, but Ms Brownhill also refers to the capacity of controlling the votes of a majority of members, which is how government proceeds. “This capacity derives from party discipline,” she asserts.

Political commentator, Professor Rolf Gerritsen (right), also speaks about the “solidarity of Cabinet” as fundamental to governing. But, he asks, what would happen if Independents were in the majority in parliament? “Technically this would have to be able to work” – they would have to come together govern, essentially in coalition. They would simply have to “negotiate every single policy”, as happens in some European jurisdictions.

If the final election results confirm, as looks likely, that there are  more Independents than CLP members “it beggars belief” how the CLP could form an Opposition, taking on shadow responsibility for 30 or more portfolios, says Ms Lambley.

Ms Brownhill also looks at this possibility and has been unable to find any instance in an Australian jurisdiction of an Opposition formed by fewer than four Members.

She also considers the possibility of having no Opposition, a situation that applied in the very First NT Legislative Assembly, consisting of 17 CLP Members and two Independents who were not nominated as an Opposition. The business of government proceeded nonetheless.

She says no significant constitutional or legal implications flow from such a situation. Non-Labor Party Members – both Independents and remaining CLP Members – could still “act in opposition” without comprising an Opposition.

It remains open to the government to provide resources to non-Labor Members, she says, a conclusion also reached by the Clerk, Michael Tatham, who says ultimately this will be a matter for the Legislative Assembly to resolve.

Ms Lambley says ideally it should be sorted out before then: “Governments shouldn’t be deciding who the Opposition is, really”.

She says that none of the Independents are “going to die in a ditch over this, none of us expected or aspired to this” but they do feel a responsibility to pursue the issues at this stage.