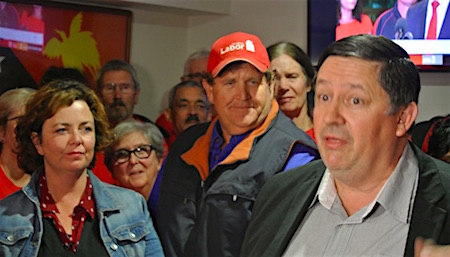 
Try and resurrect the CLP, start a new conservative party, or form a branch of the Liberal Party – those seem to be the options for the Country Liberals after last night’s election massacre that is set to leave the party with three seats out of 25.

AT RIGHT: Dale Wakefield who may unseat Chief Minister Adam Giles, Scotty McConnell who trounced Bess Price in Stuart and Adam Findlay, whose preferences got Independent Robyn Lambley over the line in Araluen.

So says Steve Brown who contested and lost Araluen, in the party’s heartland, where it was created 1974.

Araluen has never been anything but CLP, and if former Chief Minister Adam Giles loses the only other urban seat in The Centre, Braitling, which is on the cards, then the annihilation of the party in its birthplace will be complete as the two bush seats around the town have gone to Labor.

Mr Brown says: “It’s early days. I have to think about it carefully.

“We have to get better at promoting our own people. We have not been good at getting local people with local knowledge, history and background into Parliament.

“There are conservative people in Alice Springs. They need to be represented.

“Perhaps it should be more difficult to become a candidate. We have to find a way.” 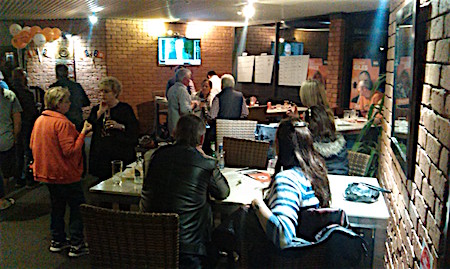 Mr Brown, a member of a large pioneering family whose patriarch, Jim, was a founding member of the CLP, says “blow-ins” who want to use the political system in the NT to create their own careers are to blame for the disaster last night.

AT LEFT: CLP supporters at the election night party.

One might think that is a reference to Mr Giles whom he formerly threw his weight behind, and whose accomplishments for Alice Springs he still supports.

Mr Brown takes aim instead at CLP figures in the Top End have been “fighting with each-other to position themselves for after the election. The party has been hijacked by the north. It’s time for a better way.”

“Terry Mills, at the core of all the dissension in the fist place, wangled his way back in, not listening. And we are preselecting the wrong people, acting like movie stars.

“In a vacuum like this every lunatic comes out to have a go. They don’t care for the community, only themselves. We need a stable group of people.”

Significantly, the sitting Member for Araluen, Robyn Lambley, who was first elected as a CLP member, chose to become an Independent during the internal strife that, at least in part, has triggered this thrashing.  She won last night with preferences from Labor’s Adam Findlay.

Labor’s Chansey Paech is set to win Namatjira, having enjoyed campaign support from retiring Member, Independent Alison Anderson who had also won the seat in 2012 as a CLP candidate (having first stood for Labor). Scott McConnnell trounced the CLP’s Bess Price to regain Stuart for the ALP.

Dale Wakefield is narrowly ahead of Mr Giles in Braitling – too close to call last night. The count resumes in Monday.

Despair set in around 8pm at the CLP election night party, held in the Alice in the Territory hotel on Stephens Road: people talked in small groups, watching disconsolately the ABC’s comprehensive coverage which by then was giving Labor the win. Some were already starting to leave. 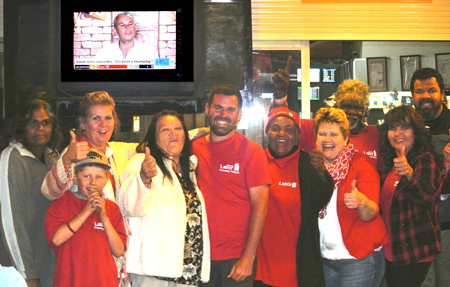 Mr Paech (centre, photo at left) organised his electorate’s own party at AJ’s Tavern in The Gap, outdoors, with mostly family members and Aboriginal people present, in high spirits. They posed for photos while behind them Mr Giles conceded defeat.

They paid little attention to Mr Giles’ claims: “We’ve done a lot in the last four years, a lot of restructuring from an economic point of view. I think the Territory will grow and prosper much more for all that we have done.”

“The Territory is in a better place” now than in 2012, claimed Mr Giles before – bizarrely – toasting his resounding defeat.

The ALP’s main festivities were at the RSL, with Mr Snowdon arranging corflutes and supporters in red T-shirts as backdrops for the cameras, and then speaking at length. Ms Wakefield, Mr McConnell and Mr Findlay spoke only briefly.

Even if Mr Giles regains his seat, observers say he is unlikely to be content with being in a Parliamentary wing of three.

A comment from CLP Senator Nigel Scullion, who was on the ABC’s election broadcast panel, may have been a hint. He said Mr Giles is “not only a mate I think he’s but a remarkable individual. Whatever happens tonight I think we’ll see a lot more of him in the public space in Australia”.

There has recently been speculation that Senator Scullion may resign from Parliament and Mr Giles may be appointed in his place.

But Senator Scullion also said last night: “If you can’t preselect people who are prepared to stay the course on behalf of their constituency rather than making decisions about popularity half way through … we’re going to have to look very closely at that process because that process has certainly let us down.”

And the chances of the CLP – should it survive – of giving Mr Giles another go seem slim.