NT poll – only one more sleep

Snippets from the hustings, for those who still care, brought to you by ERWIN CHLANDA.

“The war on drugs has already been lost. We must act now to protect our youth and attack the problem at the source,” says Braedon Earley (at left) of the  1Territory Party, who wants the laws concerning the use of recreational marijuana to be relaxed.

This should involve witness protection, the medicinal use of marijuana, the sales, regulation and taxing through government run dispensaries, voluntary pill testing  and a $10,000 bounty on drug dealers acting outside the law.

With Labor’s announcement of a $9m package over four years to kick-start the NT screen industry, matching the CLP’s own, recent, election commitment, the Territory film and television production is now set to take off – whoever wins this weekend’s election, says Alice Springs film maker David Curl (at right).

“For the first time, NT businesses in the film and television industry, which potentially exports Territory-made, Territory-owned products to more countries than any other, will be able to compete fully on the international stage,” he says.

The residential construction industry in the Northern Territory requires urgent policy attention and support from the NT government, says Neilia Ginnane (at left), of the Housing Industry Association.

“The extent of the current downturn in new home construction in the NT is sucking life out of the broader Territory economy,” she says.

“New dwelling commencements fell by 11% in 2015/16 and under current policy settings are projected to decline further over the next three years.” 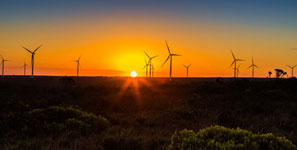 “South Australia’s Hornsdale Wind Farm has agreed to sell its electricity to the ACT government for just $73 megawatt per hour, fixed for 20 years,” he says. “It’s a significant milestone for Australia’s wind industry.

“You’d be lucky to build half a gas-burning power plant for that price. The cost of wind power has dropped by 50% over the last seven years.”

CLP candidate for Araluen Steve Brown (at left) says the Country Liberals will invest $15m to open up 11 new areas to tourism and recreational activities in some of the Territory’s most spectacular parks and reserves over four years.