Giles, still the King of the Castle, backs Brown's plan 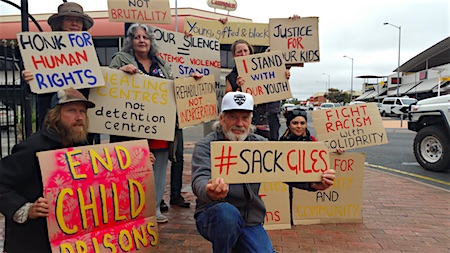 … but getting thought the blockade can be a bit of a mission.

In an interview with the Alice Springs News Online yesterday Mr Giles said the scheme – linking guarantees by the government for the purchase of a dwelling with a five year commitment by the tenant to live and work in Alice Springs – is worth consideration and would be looked at after the election on Saturday.

Meanwhile Mr Giles, asked whether he took responsibility for the decimated state of the CLP in The Centre, cited his sacking of Alison Anderson as Children and Families Minister as an act of leadership which benefitted the party. He did not refer to at all to the departure of Robyn Lambley, nor the under performance of Matt Conlan.

“You can’t have poison within your organisation that’s eating away at the membership. We couldn’t have it. It was bad for government, bad for the party.

“So she’s no longer there, that was a sign of leadership,” says Mr Giles.

“She was causing problems in the party. She had to be removed from her Ministerial responsibilities and removed from the Parliamentary Wing. I made that decision.”

Mr Giles, the sitting Member for Braitling, rejects the notion that the prospects in Alice Springs for the CLP in Saturday’s election are poor.

“If you did some polling in Central Australia you would see the CLP is the preferred party by a long shot.

“The changes to the seat of Braitling by the Electoral Commission has certainly put a greater level of pressure on the Country Liberals.

“We’ll wait and see what happens in Araluen,” where Ms Lambley is re-contesting as an independent.

Says Mr Giles: “[We are] safer, unemployment is lower, employment is higher, tourism numbers are back to a 15 year high, there is more investment coming into Central Australia.

“Are we still the murder capital of Australia, no we are not. Is there less alcohol in the streets? Yes, there is less.

“There has been a 40% reduction in house break-ins in the last four years. That’s a fantastic outcome.”

Has the welfare industry grown?

“We have more police officers, more corrections officers. On an anecdotal basis, there has been a change of dynamic in town.

“There wasn’t a lot of private sector investment. It was all government servicing.

“Now there is a different dynamic with private sector investment, significant investment in the tourism sector.”

Asked where is this investment Mr Giles said: “The tourists are bringing the money in, filling hotels. The AFL game, the Parramatta Eels game. Red Centre NATS, the Light Festival this year. More money going to Henley on Todd.”

We put to Mr Giles that the Henley on Todd crowd was the same as last year; we checked with three hotels which all had vacancies this week, three days running. Has production by the private sector in Central Australia gone up or down in the past four years?

Mr Giles says there is more investment in the construction industry, including road building, Kilgariff, where the infrastructure is being built by the government to attract private housing. Government rent guarantees has also stimulated the refurbishment in the South Edge development.

Mr Giles says his Government’s pro-mining attitude has encouraged a $200m expansion at the Granites goldmine, and at the Tallus salt mine at Titjikala – “there has been a lot of money going into it”.

A garnet sands project near Harts Range and a titanium and vanadium mine near Barrow Creek, “all of these projects are going ahead because we’ve been supportive of them.”

There is also expansion in horticulture – the onion plantation added on to the Rocky Hill vineyard run by Ritchie Hayes.

Mr Giles says pastoralists are looking at diversifying into horticulture. He declines to name the particular cattle stations “for commercial reasons”. They are along the Plenty and Sandover highways and around Ti-Tree.

The 40 kilometre, $25m Mereenie loop sealing has started with construction crews deployed on the ground after a planning period spanning two budgets.

The project will “ignite” Hermannsburg whose people will be able to “get into business and get into jobs”.

Mr Giles was noncommittal about free camping along the 400 km sealed loop through the West MacDonnells, which is set to become a Mecca for self-drive and grey nomad market.

He says he is “mindful of not camping willy nilly on Aboriginal land,” and he is not prepared to “dictate to traditional owners”.

Mr Giles denies that his government has all but washed its hands of the control of buffel which is a weed in SA and is a major threat to the $2b tourism industry by displacing native plants and increasing the risk of destructive bushfires.

However, this is in contrast with a statement made on July 15 by the Minister for Land Resource Management, Gary Higgins, who suggested buffel control should be done by communities which “can voluntarily administer on-ground control of buffel grass in chosen areas of high environmental value and cultural significance”.

Mr Giles says because the national parks are joint management with Aborigines and run by boards means there is a “myriad of people we have to talk to”.

Should the $24m spent on the rail overpass which most people consider unnecessary have been diverted into roads in the West MacDonnells?

NEWS: You told the News that you welcome the overpass.

NEWS: What is the benefit to Alice Springs for Tourism NT promoting the Ayers Rock Resort?

GILES: About 35% of the people visiting the resort also come to Alice Springs.

Meanwhile Sportsbet says 97% of punters are tipping Mr Giles will lose his seat of Braitling on Saturday.

“He started the NT election campaign at a short $1.05 to hold Braitling, but has today been wound out from $1.22 to $1.35 as punters continue to throw their support behind Labor’s Dale Wakefield,” says a spokesman.

“Wakefield has attracted 95% of the money bet on Braitling, with independent Phil Walcott the only other candidate in the field to receive any support with 2% of total stakes.”