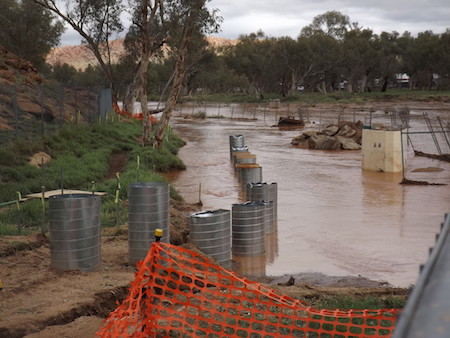 The genesis of the Annie Meyer Hill-Todd River boardwalk began with the “Alice in 10” project announced by Chief Minister Denis Burke in March 1999, beginning with consultation that identified management of the Todd and Charles Rivers as one of the highest priorities of public concern.

Right: Boardwalk construction,  after the hail storm in June 2016. Note the large pile of excavated rock on the right of the picture.

This became one of the “key themes” which declared: “Develop the Todd and Charles Rivers as Community Areas. The project involves encouraging full local and tourist use of the rehabilitated areas in a staged process” (Alice Springs Town Council, “Advancing Alice Springs”, Issue 2, August 1999).

The Alice in 10 scheme was rebooted by the Martin Labor Government in 2005, again commencing with a consultation phase to ascertain the areas of most concern to the public; and once again identifying the management of the Todd and Charles Rivers as a significant matter of interest.

Meanwhile work progressed on a cycle pathway along the Todd River next to Barrett Drive. In early 2005 this work was extended across the Tuncks Road causeway along the riverside boundary fence of the Olive Pink Botanic Garden (OPBG).

During May 2005 the boundary fence around the base of Meyers Hill was dismantled, all the way to just past (and including) the new pedestrian gate on the west side of OPBG.

This puzzled me, as the pathway under construction actually diverged away from this vicinity towards the end of a rock outcrop abutting into the Todd River. The grading of the pathway reached the rock outcrop and then all work abruptly stopped.

This left OPBG exposed to unrestricted access by trespassers after hours, and (as I recall) it was at the insistence of then curator Clarry Smith that temporary fence panels were erected all the way around Annie Meyer Hill to rectify this problem. They remained there for about a year.

Everybody was playing their cards close to their chests but it gradually emerged that work on the cycle path was halted due to damage inflicted on a sacred site. This was ironic as the contractor hired for this project was the Arrernte Council of Central Australia.

The story “Site desecration with a twist” was broken first by the Alice Springs News in early December 2005, by which time the Aboriginal Areas Protection Authority had launched legal proceedings against Arrernte Council, ultimately successful in 2006.

In July 2006 the NT Government published Issue 10 of “the alice in 10 times” newsletter which included the article “Extension to the Todd River pathway”, cheerily reporting the progress of pathway construction along the east bank of the Todd River as if nothing untoward had happened at all.

The newsletter stated: “Further funding has been provided to Council to complete the pathway north from Tuncks Road, to cross the foot of Annie Meyer Hill and under the Stott Terrace Bridge. A fence is currently being constructed along the edge of Annie Meyer Hill and a small prefabricated bridge will be installed across the Sadadeen drain to allow for continuous access on the pathway. Negotiations with Lhere Artepe are being finalised for sacred site clearance near the base of Annie Meyer Hill, with pathway construction expected to commence later this year.”

This was completely misleading; the “fence currently being constructed along Annie Meyer Hill” was actually the replacement of the previous OPBG boundary fence and pedestrian gate. All the original fence posts were re-erected in precisely the same positions they had been before but new wire mesh was attached to replace the old.

Contrary to the government newsletter’s optimism, negotiations to finalise “sacred site clearance near the base of Annie Meyer Hill, with pathway construction expected to commence later” in 2006 was blocked by refusal of the Traditional Owners to permit any further work to proceed.

Nothwithstanding this, construction of the “small prefabricated bridge” across the Sadadeen drain next to Meyers Hill proceeded in 2008, and was quickly dubbed “the bridge to nowhere.”

This year’s renewal of media coverage of course relates to the construction currently underway of the massive concrete and steel boardwalk in the bed of the Todd River skirting around Annie Meyer Hill. It’s not just the scale of this monstrous project that astounds me but also the hypocrisy associated with it.

The AAPA a decade ago was assiduous in its successful prosecution of the Arrernte Council, for what I perceived was having caused barely noticeable damage to a sacred site. The AAPA now appears to have had a complete change of heart on this matter.

The new boardwalk is being erected to avoid the visible hill slope altogether (and this time the OPBG wire mesh boundary fence hasn’t been removed) but in the process of setting foundations for the massive concrete pylons literally tons of rock below the surface has been dredged up and removed. This far exceeds any damage that occurred a decade ago.

It seems to me the AAPA itself must now come under scrutiny for its remarkable inconsistency.

WHAT WERE THE ALTERNATIVES?

Another point to note is that there is likely to be localised environmental degradation caused by future major flows of the river. It’s simply a matter of cause and effect, and a massive structure of this kind (including the disturbance to the bedrock below) could lead to an unanticipated impact on the riverbed.

Was this taken into account? Has there been any environmental impact study? 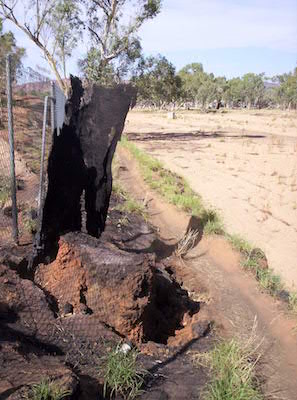 The final question is whether there really was any need for the construction of a cycle pathway or boardwalk to skirt around the base of Annie Meyer Hill. In my opinion yes, there is, as the existing dirt trail was hazardous due to severe erosion and proximity to grass-fuelled wildfires.

Left: An old river gum along the trail destroyed by fire. This photo was taken in February 2012.

Aside from safety aspects, it’s also a superb location to observe wild hill kangaroos (euros) and black-flanked rock wallabies, literally a block’s distance away from the town CBD. There’s no other urban centre I know of where this is possible but almost no-one is aware of it; cyclists and walkers are invariably focussed on the track when proceeding around the hill.

Was it possible to renegotiate with Traditional Owners for an upgraded pathway around Annie Meyer Hill that respected custodians’ wishes and was sympathetic to the environment? Precedence suggests it was; both the boundary fence and the hillside walk at OPBG that meanders its way to the top of the hill was agreed to decades ago by the TOs.

When I was working at OPBG I got to know Doris Stuart from her frequent visits, and I was a classmate of her late eldest son David Renehan all the way through high school. Ms Stuart in my experience has always been forthright but open and approachable.

I gave this matter a lot of thought when I was working at OPBG a decade ago. My vision was to upgrade the track to make it safe and stabilised against erosion but not involving any damage or removal of rocks or existing trees; there might be the need for some discreet concrete support in a few spots but otherwise its impact on aesthetic values would be low.

I further envisaged the gradual extension of native plant growth along the path to augment its presence. This maybe could have included one or two wild fig trees on the lower slope of the hill, but mainly wild passionfruit shrubs adjacent to the upper side of the path that would provide an attractive display of highly perfumed blooms and host the annual “infestation” of white caper butterflies, a visual delight; these thorny plants would also provide additional security to deter trespassers going over the fence.

Finally the entire lower slope would be smothered in ruby saltbush to replace the feral grass infestation that dominates the riverbank; once established this species is one of the few that can withstand competition from buffel and couch grasses, and being semi-succulent it is also fire-retardant.

All of these species are bush tucker plants with the added benefit of being highly attractive to a range of native bird species. It seemed to me there was enormous potential to convert the pathway around Annie Meyer Hill as a simple yet significant local attraction easily accessible within short walking distance to the town centre and be of great promotional value for OPBG.

In addition to all of this was my intention to progressively eradicate buffel grass on Annie Meyer Hill. I had already commenced to do this after having achieved feral grass control over the grounds of OPBG in January 2007 (Coup de grass at Olive Pink) but unfortunately my unexpected dismissal when I was on holidays overseas in mid 2008 terminated my involvement with the Garden.

Now that the construction of the “Alice Springs monorail” (aka boardwalk) is underway it would seem that any hope of this low-key approach or anything like it is out of the question for years to come.