Braitling preferences 'not a get Giles exercise' 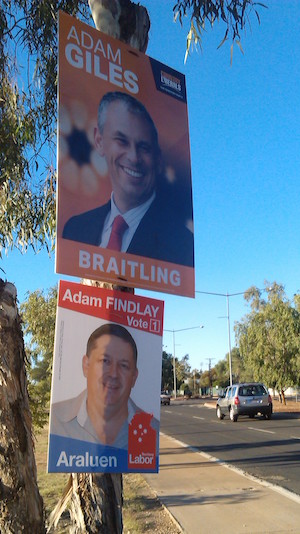 Less than two weeks out from the election all eyes are on Braitling which has the biggest number of candidates in The Centre, and the incumbent is the Chief Minister.

He had pushed through the introduction of operational preferential voting, which means Territory voters no longer need to allocate preferences, presumably because Mr Giles thinks it will benefit him.

It’s unlikely that he will get 50% plus one of the primary vote, so the following system will kick in: The candidate with the smallest number of primary votes will be excluded and his or her preference votes – if any – will be allocated as though they were primary votes.

This process is continued until someone has the magic 50% of the votes left in the count plus one.

The outcome in Braitling will now depend on deals between the candidates who are less likely to do well, how successful they are in convincing the public to allocate preferences, and do so in a way that will harm Mr Giles.

At least that’s what many people had expected, but at least so far, that’s not at all they way it’s shaping.

Independent Phil Walcott has a nifty grasp on the strategies by virtue of having run twice before, albeit never winning a seat.

He drew the last spot on the ballot paper which isn’t as bad as it sounds: Rolf Gerritsen, Professorial Research Fellow at the Northern Institute, says it’s worth about half of the percentage advantage, maybe 2%, compared to top position, because of the reverse donkey vote.

“I’m lucky not to be stuck in the pack – plenty of room to manoeuvre,” says Mr Walcott.

“I’m in sync with many of the Greens’ policies except the ban on live export trade. That will never win in the NT with so many families and industries reliant on it.”

He says he has reservations about Labor’s proposed moratorium on fracking: “I want an immediate ban on the practice. Enter the renewable energy sector.”

This makes it surprising that he asks voters to put Labor’s Dale Wakefield second, the Greens’ Dalton Dupuy third and leave positions four to seven blank.

“Given there will probably be a change in government, it seemed logical to add support to the incoming one,” says Mr Walcott.

At least so far he isn’t part of any close-knit cabale vowed to unseat the “Chief”.

Eli Melky, who brands himself as a conservative Independent, is making no preference recommendations except “if they can’t put me first I’ll asked them to put me second”.

Independent Jane Clark, who has stood for the Greens in the 2007 Greatorex by-election and in 2008 against Mr Giles in Braitling, says she too will not make preference recommendations.

She says she doesn’t want to restrict people from exercising their freedom of choice about preferences. She says they will be important as she is likely to be the first or second candidate to be excluded.

“I don’t see this as a ‘get Giles’ exercise,” says Ms Clark.

Dalton Dupuy, standing for the Greens, says his how to vote card will recommend the following order from number 2: Ms Clark, Mr Walcott, Ms Wakefield and Mr Melky with positions 6 and 7 blank.

Mr Dupuy says in the recent Lingiari Federal election it had become clear that Braitling “is an informed and aware electorate” which would take a dim view of attempts to manipulate voters though preference deals.

He says in the Greens’ preference choice the positions on fracking – against it – had been the prime consideration.

In Araluen, the ALP’s Adam Findlay is putting Independent and former CLP frontbencher Robyn Lambley on top (behind him, of course) of his how to vote card, ahead of the CLP’s Steve Brown.

Independent Alfred Gould says he is concerned that both the major parties are in favour of fracking.

He is still making up his mind about preferences, busy replying to “a lot of emails” on a broad range of topics including “white people and black people getting further apart,” alcohol, crime, the speed limit and the hospital.

Mr Keeling, standing on a one-issue platform of ending the waste hundreds of thousands of camels and turning them into a vibrant business for the bush, will not direct preferences.