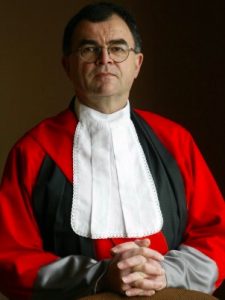 UPDATE, 1 August, 2.30pm: Donna Ah Chee, speaking on behalf of the Aboriginal Peak Organisations of the NT, says that is “pleasing” that an Aboriginal person has been appointed as co-commissioner.

Mr Gooda, as Aboriginal and Torres Strait Islander Social Justice Commissioner, is known to Aboriginal people in the NT. However, it is is “disappointing” that this role has not been filled by an Aboriginal person from the Territory, who could provide a “contextual viewpoint and contribution” to the co-commssioner (former Justice White from Queensland).

This said, Ms Ah Chee thinks it is time now to move on, let the Royal Commission happen, and hope that it can deliver some “good outcomes for our young people”.

UPDATE, 1 August, 1.10 pm: Mr Martin, former Chief Justice of the Norther Territory, made his announcement at a press conference today in Parliament House, Canberra.  In a written statement he said:
“It is essential that those persons and organisations directly affected by the inquiry, and the broader community, have full confidence in the independence and competence of the Commissioner and, ultimately, in the findings of the Commissioner …

“It has become apparent that, rightly or wrongly, in this role I would not have the full confidence of sections of the Indigenous community which has a vital interest in the inquiry. As a consequence, the effectiveness of the Commission is likely to be compromised from the outset.

“I am not prepared to provide in the face of that risk.”

He also said his resignation did not imply doubt of his own capacity to be independent and competent, nor did it imply any criticism of the Government, the Prime Minister or the Attorney-General.

Mr Martin’s replacement is expected to be announced today.

They are asking for the appointment of someone with no professional relationships to the Territory, such a s a retired former High Court judge, and two Indigenous co-commissioners, a male and female.

“This is an opportunity for a fresh start on the process of forming this Commission,” spokesperson John Paterson said.

“We would like to thank the Commissioner for his courageous and difficult decision.

“We appreciate these past few days must have been a stressful time for him and his family and we commend his action in the face of the controversy that has surrounded the issue.

“We welcome his acknowledgement that his decision has been made foremost in the best interests of our children who are the subject of this inquiry.

“We wish to make it clear that his stepping down in no way reflects on his standing or capacity and we acknowledge his distinguished legal career.

“We again call on the Prime Minister and the Attorney General to consult with us on any further appointments to the Royal Commission,” spokesperson Donna Ah Chee said.

“The Commission should only be headed by somebody who is truly independent with no prior professional relationships in the NT.

“We are asking for a former High Court judge or someone of similar standing to be appointed.

“The Government must consult with us if this process is to be regarded as credible and if we are to have confidence in this Royal Commission and its deliberations.

“This is an important opportunity to get this right and work with us rather than to us,” Mr Paterson concluded.