An island home or youth detention? 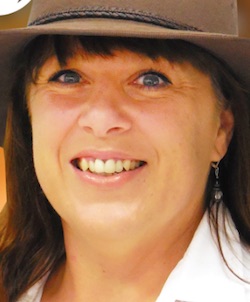 ”When society thinks they are the worst thing in the world they need someone to love them through it.”

As the nation grapples with the youth detention scandal by appointing a Royal Commission, and the media is crammed with statements from dozens of experts with scant first-hand experience, Andi Bracey recalls her volunteer work on Bremmer Island.

It was the place delinquent boys were sent for “corrections”.

The candidate for the 1Territory Party in the electorate of Stuart says she flew to the island from Nhulunbuy once a week or once a fortnight, with the Mission Aviation Fellowship pilot.

She is the mother of five and past-president of the Northern Territory Isolated Children’s Parents Association, in which she held the Specific Needs Portfolio, and has a background in cattle station management, small business and staff training.

She says Bremmer was managed by an Aboriginal woman in her sixties, but apart from her family “the island was full of young Aboriginal men.

“They were there to get some grounding and help. The alternative for them was mainstream detention centres.

“They were so glad to see us,” says Ms Bracey.

“Sometimes we would bring extra food, but mostly we were just sitting down, talking about moral standards for living.

“The boys were learning things they had not learned before, that they are important people, that they have roles in society.

“The whole island would come. Sitting around the campfire, we would talk about what’s on their mind, the struggles they were having.

“It’s about connections. They need someone who is their greatest cheerleader, someone who believes in them.

“It was working. Connecting one on one is really important. There needs to be a bond.”

Tragically, the program stopped. The pilot took a job in Papua New Guinea. The boys began to escape from the island.

So, with her candidate’s hat on, where to from here?

Says Ms Bracey: “We need programmes that engage the youth to keep them on track and 1Territory will ensure that these youth programmes are tailored for the different needs and locations of youth in the Territory.

“It is much than to try and pick up broken pieces as an adult.

“The youth have been neglected in the Territory especially in isolated and remote locations.

“Sure, there are amazing community members doing their all to try and carry the burden of it, but what is really needed is funding, and it is time that we turned this around.”