The Central Australian Aboriginal Congress, a major NGO in Alice Springs with an annual budget of nearly $40m, is calling on the Federal Government to sack the NT Government over the treatment of juvenile prisoners revealed by Four Corners.

CEO Donna Ah Chee (pictured) says in a statement released last night that the NT government “has led a concerted and sustained campaign to demonise young people without attempting to properly understand the social determinants causing the problems these young people face”.

She says Congress supports demands by “key peak Aboriginal organisations including the following”:

• The Commonwealth Government should immediately sack the NTG and call a new election as it is collectively, directly responsible for the punitive, barbaric treatment of young people.

• Solitary confinement and use of physical restraints on young people should be immediately suspended.

• An alternate provider of youth correctional services should be appointed.  The NT Department of Corrections cannot continue to deliver these services – kids are ‘at risk’. This could perhaps be done through the immediate transfer of responsibility into a new Youth Justice section within the NT DoH where the focus is on treatment and support rather than punishment.

• Therapeutic support services should be provided to families and children impacted by these events.

• There needs to be a review into each case of all young people currently in detention in the NT, to ascertain whether these young people have been detained unnecessarily. 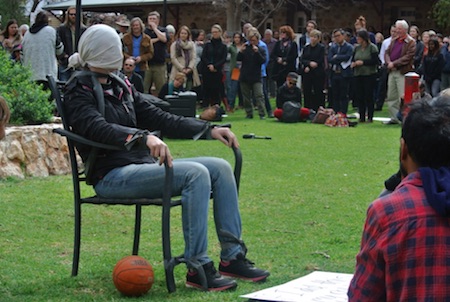 Ms Ah Chee, who spoke at the rally on Tuesday (pictured), says specialised youth health services, such as headspace, “have for many years trained health professionals working with young people to learn to ask the question, ‘what’s happened to you’ rather than the judgemental question, ‘what’s wrong with you’.

“It seems the NTG requires similar training as it chooses to continually blame very young people for their problems rather than to understand and work to change the circumstances that have caused the problems in the first place.

“The issues covered in the Four Corners program have been documented by the NT Children’s Commissioners previously and are well known to government including the Chief Minister, NT Police and Correctional Services.

“The NTG continues to pass draconian laws targeting Aboriginal people and which are inconsistent with the recommendations made by the NT Children’s Commissioner’s report on Don Dale.

“Just recently, Congress was part of a campaign to stop proposed draconian changes to the Bail Act (NT) that would have otherwise enabled young people to be detained in jail prior to presenting at court. This was only just averted.”