The mistreatment of Dylan Voller – the boy who has become a young man inside the NT’s youth justice system and whose systemic abuse was aired on the ABC’s Four Corners program last night – began in Central Australia, when he was first taken into custody at Arrernte House in 2008.

He is pictured in the Four Corners documentary strapped into a “mechanical restraint chair”.

Youth Justice Program Coordinator for Central Australian Aboriginal Legal Aid Services, Antoinette Carroll, describes dealing with his situation then as the most distressing time in her career and she says it was and has been ever since the subject of many complaints. She says the investigation into Dylan’s case by then Children’s Commissioner Howard Bath looked at both his experience in detention and his “care and protection ” issues, as he was at the time in the care of the Minister.

She welcomes a Royal Commission, announced this morning by Prime Minister Malcolm Turnbull, and hopes that its terms of reference will be very broad as “Don Dale [Juvenile Detention Centre] is only one issue”.

She says young people in the care of the Minister make up a  large proportion of the juvenile justice population and the therapeutic support for them is “zero”. Many of them  are damaged by early childhood trauma, and / or suffer from  cognitive disabilities and undiagnosed foetal alcohol spectrum disorder.

“If you don’t provide therapeutic support they won’t change. They need support, their families need support.”

She says a raft of strong recommendations about responding to the needs of Dylan Voller have  been made by professionals in contact with him, but have been ignored by the government: “We were told the costs were too high.”

But look at the costs of keeping him in detention, where he still is today, urges Ms Carroll. The “tough on crime ” approach of the Giles government is a gross failure: “Ask the people who continuously have their houses broken into how that’s working for them.”

There is no collaboration between the detention system and community stakeholders, including the young people’s extended families, says Ms Carroll: “The problem is bigger than what we witnessed last night.”

Some young people from Central Australia are sent to Don Dale but others are held  in the juvenile detention facility in Alice Springs. “It’s very ad hoc.” Most girls get sent to Don Dale because there is no facility for girls in Alice, yet at present a girl is being held there, the sole girl with 12 boys.

Ms Carroll  says the Alice facility  has been described by Corrections Minister John Elferink himself as “a shithole”. It is in breach of many human rights standards and should be replaced immediately by a purpose-built facility. However, while the kind of abuse witnessed on Four Corners last night has not taken place there – “nothing like it” – she says there is no effective rehabilitation taking place.

This is despite the fact that sending a young person to detention is supposed to be a measure of last resort, and used to focus on their rehabilitation and return to the community.

She says there have been some excellent youth justice officers working at the Alice Springs facility but they haven’t lasted, as the culture does not support them.
Ms Carroll sits on the youth detention advisory committee but in a  recent meeting with Corrections Commissioner Mark Payne was told that there is “zero money – don’t even ask” in relation to the list of demands for improvements. The critical issue is lack of space – for teaching, for contact with families, for interviews between professionals and the detainees – and its collocation with the adult facility: “There is extraordinary contact between the young people and the adult prison population.”

She says while some issues in the justice and corrections system  arose under the previous government there has been “an alarming decrease in cooperation with the [youth] sector basically ever since Mr Elferink became minister.” And the system he has presided over “has been supported by 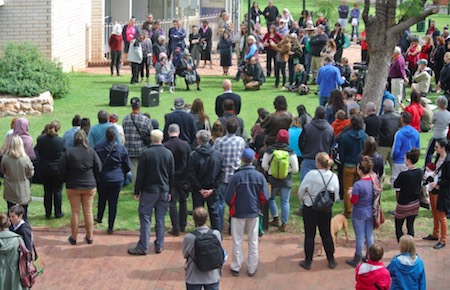 bureaucrats, staffers, policy advisors and his colleagues in parliament”.

The situation is appalling. People have not spoken out for fear of losing their jobs and because it is a small community, says Ms Carroll, but now “the lid is off and it should be off – we have been constrained for too long.”

ADDITIONAL PHOTOS: Protest in the Mall at lunchtime today.

By JULIUS DENNIS The cost of the Mercure Hotel quarantine facility, now empty but on stand-by, is $18.4m. It is providing a “quarantine bed capacity” in...
Read more
Issue 1