'Terrorists will not stop our laughter' 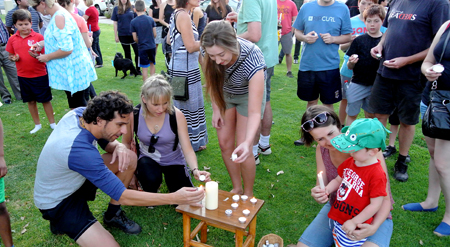 The French community in Alice Springs will observe a minute’s silence when it celebrates Bastille Day, to show respect and support for victims of the terrorist attack in Nice, southern France, killing 84 people last night.

“But then we will keep on partying and laughing,” says organiser Coralie “Coco” Petit of tomorrow night’s function.

“We will not change our plans because of terrorists.”

She says the French people in town, numbering between 50 and 100, will be celebrating the French national day with tourists from France, who are visiting during the long European summer holidays.

Ms Petit, who came to Alice Springs “for a day” four and a half years ago, and who works in the tourist industry, organised the candle light vigil (pictured above) last November, after the terrorist carnage in Paris.

“It’s less than a year since that last terrible attack,” she says.

“It hurts even more because it is our national day. They touch our values. They indirectly touch our feelings.

“Now the same story has happened again French to people.”