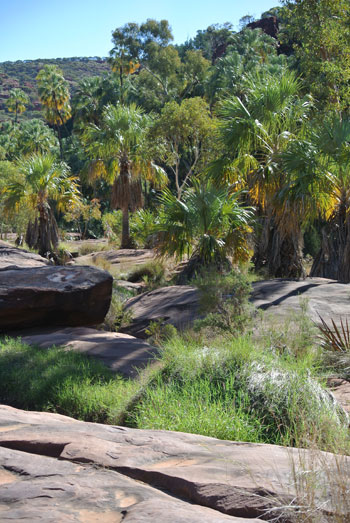 Invasive buffel grass is joining fracking as a scourge in the public mind at this pre-election time, threatening The Centre’s lifestyle, and its prime commercial asset, the national parks.

The NT Government is blissfully favouring one industry at the expense of another which is worth half as much: Official estimates put the annual earnings of tourism at more than $2b and those of the cattle industry – which is fighting tooth and nail the declaration of buffel as a weed – at about $1b.

Meanwhile there is a massive outbreak of buffel in Palm Valley, with the parks service doing nothing remotely adequate to safeguard the town’s most significant natural attraction and economic asset, now that Uluru is providing little benefit for Alice Springs.

SA has been battling buffel for around two decades and last year declared it a weed, calling it a “pest plant”.

The NT parks service told the Alice Springs News Online on June 23 that it had spent, Territory wide, “more than $52,000 on weed control so far this financial year, not including staff and vehicle costs”. (There were seven days to go in the financial year.)

The South Australian government’s “Strategic Plan 2012–2017” to fight buffel says this about its war on the weed: “The cost of labour and materials for herbicide spraying varied from almost $10,000/ha in 2000 in the initial stages of the project, to $50/ha in 2006 for regular follow-up spraying of buffel grass after rain events once the buffel grass was largely under control. Over the 10 year period (1997-2007) the average cost was $5500/ha.”

At that rate the spend by Ms Price on weeds would have taken care of an area of buffel a kilometer long and 100 meters wide. 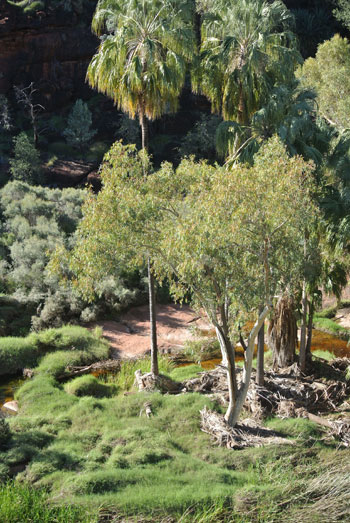 Here’s another figure: On July 4 there were 582 people in the Alice Springs jail. Probably half of them are non-violent – the kind of prisoners who in the 1980s built the now iconic Larapinta Trail, 223 kilometres through the magnificent West MacDonnells.

Why are these people not engaged in the combat of buffel?

A Parks and Wildlife Commission sign at the top of the Palm Valley rim walk highlights the absurdity of the situation: “While introduced grasses have helped to stabilise the banks, they leave little room for seedlings to emerge and survive,” says the sign.

Looking down into the magnificent valley there is little evidence the “joint management partners and volunteers are working together to remove introduced grasses from around the palms, giving young seedlings more opportunity to grow,” as the sign claims.

No wonder there has been a dramatic decline in the number of palms.

As on-site research by the News revealed last week, there is buffel all along the valley.

In some areas it is waist-high. It is especially thick around the trunks of the mature palms. Buffel is interspersed with couch – also an introduced grass.

In their strategic plan the SA authorities don’t mince their words when it comes to buffel.

This is an extract from the plan:-

A formal weed risk assessment of buffel grass demonstrates a high to very high risk for both arid rangelands and native vegetation land-uses in South Australia.

Although it has been planted for pasture development in other states, productivity of buffel grass dominated pastures can decline in the longer term.

Individual tussocks have a long lifespan and can readily re-sprout following fire. Once established, there is no single control method available for the successful management of buffel grass over extensive areas. 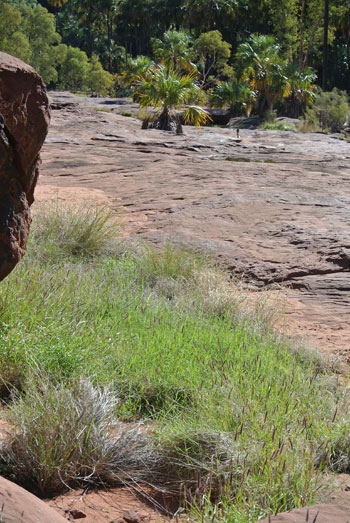 The potential value of buffel grass for livestock production is offset by its serious conservation and social impacts.

It has been identified as a “transformer weed” of the Australian rangelands due to its ability to transform the basic attributes of habitats.

Modelling suggests buffel grass could establish in over 60% of mainland Australia.

Eradication of buffel grass from the Stuart highway and other roadside verges south of Coober Pedy is therefore an important step towards minimising further spread.

The program started in 2007 and, by the end of 2010, the Port Augusta to Pimba roadside had been sprayed three times, the Pimba to Glendambo stretch twice and the Glendambo to Coober Pedy stretch once.

In a June 2010 roadside survey very few live buffel grass plants were found along the road verge from Port Augusta to Pimba, even after good rainfalls in the area, however after ongoing extensive rains late in 2010 and early 2011 regeneration of buffel grass was moderate both on the Stuart and Eyre highways, demonstrating the need for ongoing management.

All photos by the News, showing buffel infestations in Palm Valley last week.

The office of Parks and Wildlife Minister Minister Bess Price released the following statement this afternoon:

“Buffel grass is widespread in Central Australia and is a recognised environmental threat by the Finke Gorge National Park Integrated Conservation Strategy.

“This strategy guides the Parks and Wildlife Commission’s weed management so as to get the best results when protecting unique areas such as Palm Valley.

“Buffel grass is managed by strategically targeting areas with techniques such as spraying, slashing, burning and chipping.  Buffel grass control is also carried out to protect infrastructure and minimise fire risk.”