Pistol shooting and donuts making have a lot in common 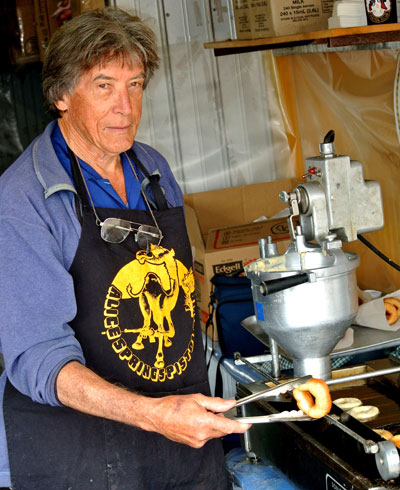 Including this weekend there have been 57 Shows in Alice Springs. Most of them have one thing in common: The Pistol Club had a food stall there.

The first one was in 1971 when the Show was still being held at Traeger Park, in the middle of town.

The club membership – whittled down by the gun buy-back in the wake of the Port Arthur massacre from about 80 to the present 27 – is proud of its history and persistence.

The latter is needed, says life member Bill Low, to cope with the tedious bureaucratic process required to own a handgun, although the licence period has now been extended from one year to five.

The red tape is far worse than even applications for rifle or shotgun licences.

But Mr Low says the club members have been extending the skills they need for their sport to their once-a-year foray into food retail.

Their One Shot Food Shop can churn out donuts in rapid fire style: “We have fastest service in the west,” says Mr Low.

As shooters have to adjust to wind conditions, so does their fast food outlet that traded under the “finger licking good” slogan long before KFC did: Lots of cool drinks on warm Show days, lots hot chocolate on a weekend like this.

As shooters who re-fill their own cartridges need to get the quantity of powder right, so does Milson Haywood who makes up the dough for the doughnut machine: If the mix is too thick there will be no hole in the donut.

“We have the best donuts in town,” says Mr Low, entirely without false modesty.

All in all, it’s a time-proven formula. The shooting range, on the eastern edge of the town, has Australia’s best indoor range for air pistols, and an outdoor range for 25 shooters.

Olympian and Commonwealth Games medal winner Christine Trefry is a very prominent past member of the club.

Holding the nationals there is now a distinct possibility.

PHOTOS: The One Shot Food Shop at the Show. Behind the counter (from left) Bill Low, Renate and Milson Haywood. Mr Low and the well calibrated donut machine.