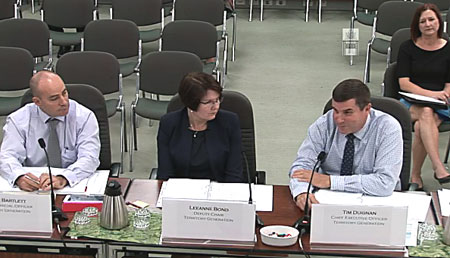 To have solar power provide 75% of the energy used for electricity generation in Alice Springs would cost $1.5b to $2b and would drive up prices by 345% for that market, according to Territory Generation boss, Tim Duignan.

“The major driver of the economics for the solar solution is the storage,” said Mr Duignan, told an Estimates Committee hearing this morning.

Questioned about the $75m expenditure for a new gas-fired power station in Alice Springs, he said that the town has “done an exceptional job with the Solar Cities program and the like to have a very solid penetration of solar in that market.

“It runs at about 40% of the existing average demand in Alice Springs, which is probably one of the higher penetrations in the world, certainly in Australia.”

The solar percentage for the peak demand is far lower.

Mr Duignan said: “The storage required would be for up to seven days.”

He said from May 2 to 8 there had been cloud cover over Alice Springs.

“That shows that we would need seven days storage to cover the requirements of that market should it be a solar-only solution.”

His forecast at the hearing, and that of Non Executive Board Director ‪Leeanne Bond‬, about the future of solar was vague: “The battery technology is currently cost-prohibitive on a utility scale, but we are going to see that rapidly change in the future.”

They foreshadowed “some community consultation across the Territory later this year which places a road map and a vision for Territory Generation’s renewable energy strategies moving forward”.

Ms Bond said there would be developments “to bring down the cost and increase the reliability, but that does not close us off to developing our renewable energy strategy and moving as the technology becomes more affordable”.

Mr Duignan said in reply to a question form chairperson Robyn Lambley: “I think in five to 10 years we are going to be right in the space. 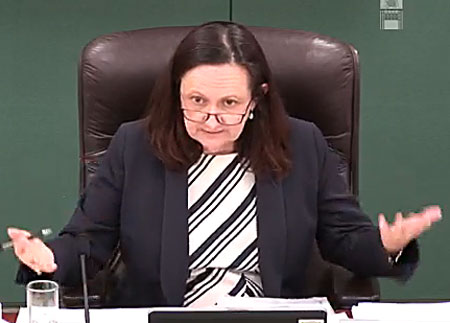 “Various experts made forecast graphs based on a fall in cost of batteries.

“We are not going to see as steep a fall as we saw in solar panels for instance, but a significant reduction in the cost of battery technology is being predicted.

“How far that will go is unknown. Solar panels themselves are predicted by 2020 to cost two-thirds less than today, a reduction of two-thirds.”

The new Owen Springs power station is scheduled for completion in December next year, and the Ron Goodin plant in town is likely to be decommissioned in mid 2018.