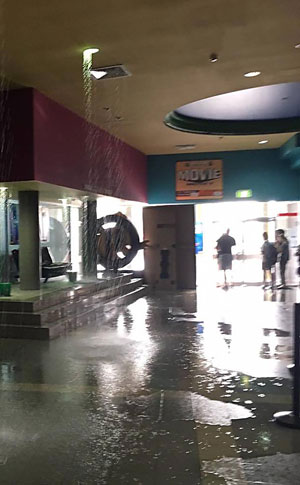 “We are naturally quite shocked and devastated by the impacts of the storm,” says cinema proprietor Paul Darvodelsky.

“Tears have been shed.”

He says the complex suffered “quite a lot of damage” in last Friday’s hailstorm.

“The hail blocked our roof drains and then water leaked in through many parts of the cinema including the projection area.

“Whilst the building owner had spent a lot of money recently upgrading the roof, this storm was just a freak with all that hail – climate change is obviously just a figment of our imagination?

“Our staff have been working flat out to clean up and make the cinema safe.  The full extent of the damage is not clear at the moment because our projection area got soaked and we have to let the electrical equipment dry out,” says Mr Darvodelsky.

“At the moment we’re expecting a two week closure.  With some luck we’re hoping we’ll get two screens up and running at this point.  If we can then we’ll start showing movies again.  Things wont look that pretty but at least we can get up and running.

“When we re-open we will be picking all the best films that people have been asking about.  With reduced screening space each movie won’t be playing for long so we hope everyone who wants to see them will be on their toes and get down to the cinema as fast as they can.  We will be doing the best we can.

“We would particularly like to thank all our loyal customers and friends who’ve sent words of support.  It means a lot to us.  We’ll be back as soon as we possibly can!

He says: “Registered community not-for-profit groups will be able to apply for grants of up to $5000.”

The program will remain open for 60 days. Quotation of works must be provided as well as insurance details. Grants will not cover insurance claims.

PHOTO: Water pours into the lobby.