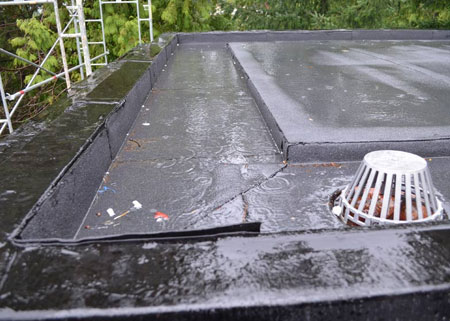 What can you do to protect buildings from water damage in the case of a big hail storm?

Once hail stones block the down pipes of the box drains, water will overflow.

Unless the design of the building directs it over its side, the water will bank up on the roof which, of course, is not usually designed to act like a swimming pool.

Ms Dugdale says homes usually have a smaller, pitched roof with the gutters attached to its edges: Water simply runs over if the down pipe is blocked or can’t keep up, but rarely makes it into the house.

The exceptions are when strong winds drive the rain up the joins of roofing sheets. This may also set off capillary action which moves water upwards along a gap of half a millimeter, until it reaches the upper edge of the lower sheet, finally dripping onto the ceiling.

The amount of water in this case is limited compared to the overflow from a box gutter, but can still damage building interiors, says Ms Dugdale.

However, the big buildings, including shopping centres, are a worry.

They are usually designed in accordance with Australian standards – but these are calibrated to the highest known rainfall, says Ms Dugdale.

Trouble is, climate change is making a difference: The big rains have got bigger.

The One in 10 Year Rainfall figure for Alice Springs is 39.7mm in one hour, says the Bureau of Metereology. During the hour with the most rain last week at Alice Plaza the figure was 37.6mm.

Ms Dugdale says nothing can be done about hailstones blocking down pipes, short of costly design changes.

These could economically be included in new buildings but not much can be done for old ones.

“This is why we have insurance,” says Ms Dugdale.

That option may become expensive: Last week’s was the second hailstorm in a year pelting the town, albeit quite different sections of it.