Above: How do we drive flow-on tourism from big events like the Finke?

Promoting the Alice Springs calendar of events as a whole instead of “in silos” leads Tourism Central Australia’s ‘to do’ list over the 2016-17 financial year.

The Finke Desert Race weekend just past is the perfect example of the way an event can draw thousands of visitors into town, but it needs to be linked to other Outback adventure experiences, extending the length of stay or enticing visitors to come back.

Events need to be packaged up and cross-promoted, especially those that come in succession of one another, CEO of Tourism Central Australia (TCA), Stephen Schwer, told the Alice Springs Town Council last night.

He reported on the success of last year’s Red Centre Adventurers campaign, to which council had contributed financially, helping buy some of the advertising airtime. It ran from July to November and in that period there was a 90% increase (38,000 visitor nights) in intra-state leisure visitation from Darwin, one of the campaign’s main targets.

It also went out via Imparja, Gem, Go, and Channel Nine, targeting Queensland, outback Western Australia and South Australia. This resulted in a rise in domestic visitors of 42% or 150,000 visitor nights.

Although that campaign used a fair bit of conventional media exposure, Mr Schwer emphasised digital opportunities – “the most targeted, low-cost marketing” – and TCA’s role in helping its members take better advantage of them.

However the association had itself missed the boat over the long weekend, Mayor Damien Ryan pointed out, with no activity on its social media platforms since last Friday. Does TCA have a dedicated social media position? he asked.

Unfortunately not, as it’s a small organization with a small budget, said Mr Schwer. The staff member who takes care of their social media was actually on business out of town, at a caravanning and camping show in Brisbane.

Also on the ‘to do’ list is a reach out to visitors at The Rock. They need to get more information about the rest of the Red Centre, he said. “Dispersal” out of Yulara is happening but “not at the level we would like to see”. (What proportion of visitors to The Rock would be in a position to change their plans was not mentioned.)

Councillor Steve Brown expressed concern about the encroachment of The Rock on Alice Springs tourism: if you google ‘Alice Springs’ you get information about The Rock (an example below). “I don’t think that’s acceptable,” he said. The town hasn’t done well with “domain names etc”, he said – in other words all the things necessary to best position itself in the digital age.

In reply, Mr Schwer said he would love to have Voyages’ marketing budget; TCA’s entire working budget comes to about one tenth or less. This has meant limited capacity to influence “search engine optimisation”, but it’s “definitely something we are looking at”.

Cr Eli Melky suggested that tourism promotion could piggy-back on the web presence of local real estate businesses (of which his own is one). He also urged Mr Schwer to not forget the potential of sporting events much smaller than the Finke in drawing visitors to town – maybe 50 to 60 participants with their support crews. He named as examples the upcoming table tennis tournament (Australian Junior Nationals, 2-9 July) and the 2016 World Rogaining Championships (23-24 July).

“Collectively they make a big splash,” he said, suggesting as many as four to five events take place each month.

Deputy Mayor Jamie de Brenni warmed to this theme, with his “bogan motorsport hat on”. There are one to two events in motorsports every month, he said. TCA, “no disrespect”, is letting a massive market flowing into this town “drift away”.

That is exactly why the association is focussed now on marketing the whole calendar, rather than each event in its own silo, replied Mr Schwer. 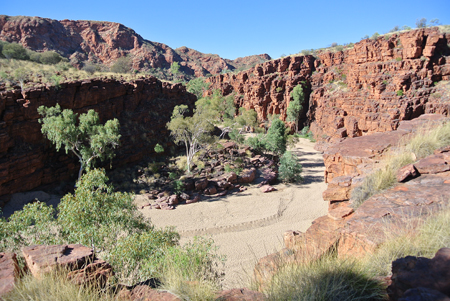 He also said the East MacDonnells (which is where the rogaining championships will be held) need “a bit of love”, and TCA will encourage the tourism businesses there to apply for grants and do workshops to upgrade their facilities and skills. That will have a spin-off for Alice Springs: encouraging dispersal across the region contributes to the town becoming a “sticky destination”.

At right: Trephina Gorge, one of the East Macs’ great beauty spots.

Getting the town to do better on representing its Indigenous heritage is also a priority, he said. He spoke of “interpretive trails” both with tour guides and through digital platforms. TCA also wants to get behind the push for a national Indigenous cultural centre to be based in Alice Springs, which is in danger of being nudged out by Sydney.

Cr Chansey Paech, speaking “as a councillor and as an Aboriginal person”, wanted to know what such a centre would look like, from the TCA point of view.

Mr Schwer said the association is open as to its concept but it would be “a game changer”, just as MONA has been for Hobart.

Telegraph Station hologram is half the story

Huge Finke media contingent to put Alice on the map