Sharp rise in women behind bars 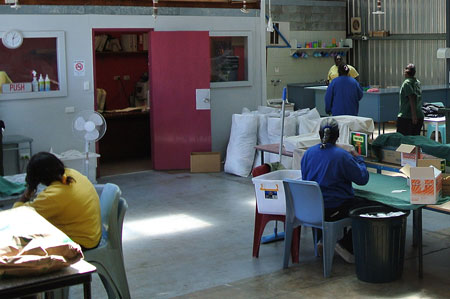 When the Alice Springs gaol was built in 1996, it did not cater for women. The rare female offender serving more than 28 days was sent to Darwin, until numbers began to rise around a decade ago. In 2010-11 a facility was built to cater for 24 female prisoners. In recent times it has been stretched beyond capacity by upwards of 70.

At right: Women in the sewing room at the Alice Springs gaol.

‘Open security’ offenders are now accommodated outside the gaol perimeter. At peak times activity and interview rooms get commandeered for dormitories. A dorm for four can be occupied by six, with trundle beds brought in. Many women eat their meals in their dorms. That’s also where they get to speak to their lawyers.

It was where LR told her lawyer that she’d never been to gaol before. Indeed she had no previous convictions of any kind. She was only 20 years old. She’d had no visits from family members, but perhaps her loneliness was relieved by having several female relatives in gaol with her. They were all from Aboriginal communities in the Barkly region, more than 500 kms to the north.

Their crimes involved a frightening attack on another woman. Her injuries included a fractured left elbow and fractured left femur at the knee. She had fled the Barkly in fear of further violence. LR was among those charged with causing the victim serious harm. In February she came before the Supreme Court in Alice Springs with four co-offenders, all pleading guilty to their charges. Other women had also been involved and at the time were still being pursued through the lower court, with one yet to be arrested.

The whole situation – the women’s serious crime as well as the over-crowding they experienced while on remand – speaks to the unexpected sharp rise in female imprisonment in the Northern Territory. While the raw numbers are still small, the imprisonment rate for women (per 100,000) has risen steadily from 37.5 in 2005 to 175.5 in 2015, a much steeper increase than the rates for NT men and for women elsewhere in Australia. Western Australia, for example, had a comparable rate for women in 2005 (35.3), but in 2015 its rate, at 52.9, was less than one third of the NT’s. The national rate in 2015 was 30.7. (ABS)

Incarceration statistics are reported by race and gender, but not both together, so it is not possible to be precise on the proportion of women in NT prisons who are Indigenous. However, extrapolating from the notorious general figure – that the NT prison population is overwhelmingly Indigenous (84.4 per cent in 2015) – and by reviewing Supreme Court cases over five years in Alice Springs, criminal defence lawyer Carly Ingles says it is clear that the rise in female imprisonment in the NT disproportionately involves Indigenous women.

Combining the fact that men are the vast majority (91 per cent) of NT offenders with the very high rate of victimisation of Indigenous women (three times that of Indigenous men) and the apparent normalisation of violence in response to conflict in their communities, Ingles also proposes that addressing men’s violence against women and children would be one way to reduce women’s offending. As if to illustrate her point, the violent assault by LR and co-offenders had as its tragic backdrop the killing of one of their female relatives by her husband.

This happened in Tennant Creek on 7 June 2015. As with so much violent crime in the NT, alcohol was involved, although the husband, Ashley Lansen, was not ordinarily a drinker. On this day, with other men, he had a lot to drink, mainly rum. He and his wife, with their two children, had been living in Darwin, where his wife hoped to remain precisely to get away from Tennant Creek’s drinking culture. Lansen, a talented sportsman, wanted to stay in Tennant for the football season.

An argument erupted. Lansen punched his wife to the head and face, knocking her unconscious. He then dragged her by the armpits into a ditch where he passed out alongside her. She never regained consciousness, dying at the scene before Lansen sought medical help early the next morning. He was sentenced to seven and half years for her manslaughter.

Three weeks after her death some twenty people, who were related to or knew her, gathered at a service station on the main street of Tennant Creek. A rumour was circulating that Lansen had been having an affair with another woman, who may have been at the scene of the killing. A dozen women from the group decided to confront her.

They found her at home in one of the local town camps, hiding in a locked bedroom. One woman attempted to break down the door with a star picket; others, outside, tried to smash the window with an iron bar. Eventually the door was forced open and young LR grabbed the victim by the hair, dragging her into the kitchen. She punched her twice to the head, kicked her with bare feet and struck her three times to the head with a small stone (not enough to draw blood, however). The women with LR in the dock in February included the dead woman’s sister. She hit the victim across the head with a metal bar. Another kicked the victim, took up an iron bar and struck her on the leg; a third hit her twice on the head with a saucepan; the fourth, struck her once on the back with an open hand, then moved away, trying to get the others to stop and later helping the victim.

SIX OUT OF EIGHT SUBJECTED TO SEVERE VIOLENCE BY THEIR PARTNERS

None of the women were drunk at the time, although some had drinking problems. Ingles, representing the dead woman’s sister, submitted that her exposure to heavy drinking and violence at the hands of her husband, might explain her own resort to violence on this occasion. LR was still single, but two of the three remaining co-offenders had also been subjected to serious violence by their partners. One had had bones broken by the father of her children on five separate occasions, including both arms and both legs. She never wanted to live with a man again.

Most of the women were caught by the NT’s mandatory sentencing provisions, aimed at violent offenders serving actual gaol time, clearly another factor contributing to the rise in female incarceration. However, in the case of the dead woman’s sister the sentencing judge, Acting Justice Dean Mildren, made a finding of exceptional circumstances, giving him the discretion to partially suspend her sentence. He also exercised the leniency due to all of them for having been held on remand in “appalling” conditions, “which do not conform with international standards”.

Two of the women walked free from the court, their time on remand accounting for the time to serve. The remaining three were freed a month later.

When a further three women charged over this incident were dealt with by the Supreme Court in early May, Ingles’ argument that violence to women is begetting violence by women seemed to gather strength. These three had a minimal role in the actual physical attack but their participation in the group, described by the sentencing judge – this time Justice Jenny Blokland – as an “angry mob … taking the law into their own hands”, was regarded as serious. Their lesser involvement in the violence and their willingness to give evidence against the principal offender, who is still awaiting trial, led Justice Blokland to make a finding of exceptional circumstances for each and so avoid mandatory terms of actual gaol time. Her leniency towards them may also have been influenced by the fact that each of the three had been the victim of repeated acts of violence by their partners. She wanted all of them to undertake a family violence program not only because of what they had done but also “in respect of their own backgrounds and to understand more about the dynamics of this type of offending”.

For one of the three, her partner had been convicted of 10 assaults on women, most, if not all of them, on her. Her injuries had required many hospital admissions. “I am well satisfied she has lived with a background of severe trauma,” said Justice Blokland, linking it to the woman’s own violent behaviour (she had been previously convicted of assault police and aggravated assault). “It would seem that her social deterioration after years of violence has led to drinking, which in turn has meant she is more likely and amenable to offending.”

Of the three only this woman remains in gaol at the time of writing, having not spent long on remand. The others are free under supervision, but on the basis of current trends in the Northern Territory more women will soon take their place.


This article was first published in The Saturday Paper on 4 June 2016, under the headline ‘Driving the corollary’ and in their online edition as ‘Steady rise in number of  Women in NT Jails’. KIERAN FINNANE is the author of the recently published book, TROUBLE: on trial in Central Australia (UQP), available in good bookshops and as an ebook.