Telegraph Station hologram is half the story 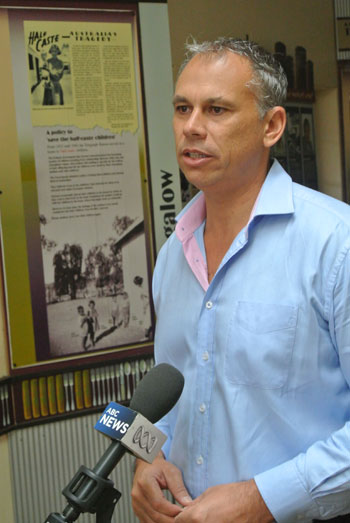 On the one hand the NT Government acknowledges the traditional owners of the Overland Telegraph Station, the location of a hologram display telling its story.

On the other hand that story ignores their role both in recent times and over millennia in this very special and beautiful Alice Springs location.

Tourism NT, which spent $300,000 on the venture, even gets their name wrong, saying on a sign this “interpretive experience is located on the traditional lands of the Lhere Artepe people”.

TNT clearly means the Arrernte people. Lhere Artepe is the name of an Aboriginal Corporation representing native title holders of Alice Springs, not a tribe.

None of the four characters telling the story in the hologram, unveiled by Chief Minister Adam Giles this morning, are Aboriginal: Explorer John McDouall Stuart, with whom Alice Springs has developed a love-hate relationship because of his statue holding a gun; Laurence Wallace, founder of the SA and NT Morsecodian Fraternity, now aged 92; market gardener Ah Hong (1865 to 1952); and Doris (Blackwell) Bradshaw (1891 to 1983) daughter of the fifth Officer in Charge of the Telegraph Station.

Only Mr Wallace, now 92, tells his own story. The stories of the other three, of course, are told by actors.

The construction in 1870 of a link to the rest of the world was a mammoth achievement.

But why is the fact omitted that the OTS was known as The Bungalow for three decades, a place of profound significance in a much more recent time?

If we want to present a varied and impressive experience to visitors, surely an opportunity is being missed.

The author of a book just finished – eight years in the making – about the OTS, Stuart Traynor, explains that between 1932 to 1942 the Bungalow was the home for children from the Stolen Generations.

It was place for broken hearts, as the drama Bungalow Song in the recent Mbantua Festival so grippingly presented, as well as a seedbed for outstanding achievers: For example, activist, senior public servant and businessman Charlie Perkins was born there.

Between 1942 and 1946 the Bungalow housed “cultural people” working for the army. 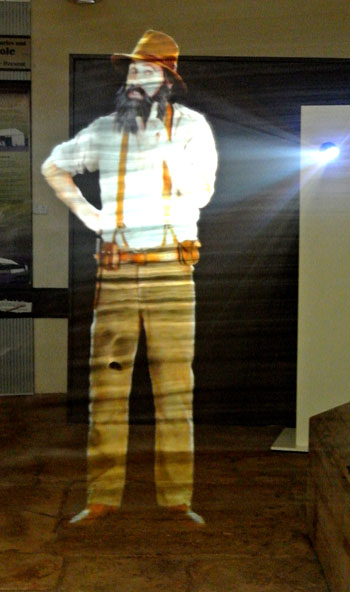 And from 1946 to 1960 the Bungalow became an Aboriginal Reserve, until the Amoonguna settlement was formed just to the east of Alice Springs.

Aboriginal people were allowed into the town temporarily for shopping or other business, but had to camp at the Bungalow, says Mr Traynor.

Many did not want to go back to the bush, so there were 300 plus residents there. He says: “There were really three successive Bungalows.”

He assisted the producers of the hologram with editing the text but had no further role in it.

Says senior Arrernte woman Doris Stuart: “Whoever is in charge of tourism, they never consult with the people. They don’t listen to what people are saying. They go on some whim, it seems. It’s laughable if it were not so sad.”

The apparent sanitising of the story is not born out by how Mr Giles represented this morning the objective of the hologram: “It showcases our history … celebrates the history of Alice Springs … [shows] how we started … helps us to know who we are … without history there would be a missing sense of self-worth.”

We asked him: Should not at least one of the four seven minute stories have been about the Bungalow?

Mr Giles replied: “There is a lot of history in Alice Springs. How to get that right is always one of the challenges.”

PHOTOS: The Bungalow is relegated to a poster behind Mr Giles (at top). It and its people did not get a gig in the hologram, while the ghost-like image of explorer John McDouall Stuart did.

• There are five characters in the overall experience [ED – one is shown only in Darwin]. These were chosen by Tourism NT based on input from various stakeholders. As you can imagine there are a large number of significant stories to tell from the Northern Territory’s pioneering and early communications history, and as such it was a difficult task to select such a small number of characters to appear in the display.  Consideration was given to selecting stories that are “lesser known” and are different from others in the public sphere. Stories were also selected that would resonated in the Top End as well as Alice Springs, as well as entertain and leave visitors feeling uplifted after experiencing the display. Aboriginal people were weaved into each of the Characters stories, as they touched the lives of each of our characters in some way.

• Laurance Wallace provided his own script.

• Various historians were consulted throughout the process to make ensure the stories are factually and historically correct.

• This particular experience is to educate visitors about the Overland Telegraph Line and its important role in the development of northern Australia. The Bungalow is a different story, relating to the Alice Springs Telegraph Station site after it ceased being a relay station.

• Tourism NT is working on modification of signage to recognise the Arrernte people.