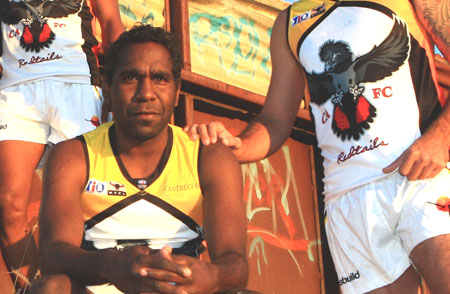 Curtis Haines (pictured) is a reserved guy, a little shy even, but his English diction is clear and his vocabulary broad, although his first language is Anmatyerre.

He also speaks some Warlpiri.

This makes him highly qualified as an interpreter in the Alice Springs hospital.

He was born 34 years ago into a big family, around 100 people, he says, in the Ti Tree and Laramba areas, north of Alice Springs.

Today he is one of the still small but growing number of Indigenous people who have a mainstream job, 8am to 4.21pm in the public service, for example.

He is earning a good wage to care for his partner and their two boys, aged six and two, who live in an Alice suburb, not a town camp.

Curtis has had his job for three years now and has no intention of giving it up. He attributes his stable circumstances in no small measure to his long-term connection with Redtails – the Alice Springs group linking football with social progress.

Curtis says the group will be “huge for Central Australia”.

He says like many young Aboriginal men, he’s been tempted to embark on a life of grog and idleness.

Work in Ti Tree is scarce, although some of his mates work in building and maintaining houses.

It was Redtails that put him on the right path.

He says he has pledged his loyalty and support to the group which now has a membership of 85 young men and 35 young women, the Pinktails.
Although getting a little long in the tooth compared to most players, he still runs onto the field, mostly as a half forward, when the Redtails get a game.