Home Issue 4 Where people have the power, not the pollies
Issue 4Issue 5Volume 23

Where people have the power, not the pollies 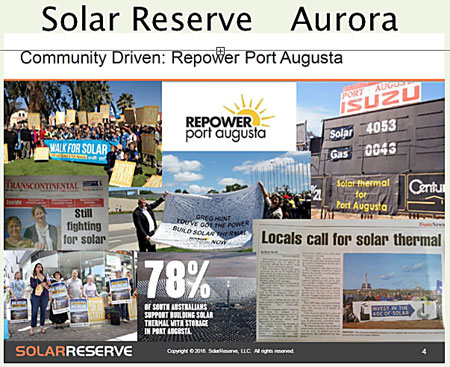 Louise Stanley, a member of RePower Alice Springs, went for an online trip to communities that are turning words into action on renewable power generation.

She says although her group is new, some options are emerging: One is to do deals with users who host a solar plant on their land or roof.

It would be owned by investors charging the host for the electricity.

When the investors have recovered their money, plus interest, the solar plant would become the property of the host.

She says there are enough Alice Springs locals to take the step from talking to doing, as are communities around the country.

The Victorian town of Yackandandah, population 663, wants to have 100% renewable energy by 2022.

A community group, formed in 2014, is roping in such luminaries as former treasurer John Hewson and singer Shane Howard (at left) attending local functions, advertised like this: “The event will be held at the Yackandandah Memorial Hall on Saturday 23 April 2016, commencing at 7 pm. Light refreshments and Bar will be available.”

In 2012 dozens of people walked the 300 km from Port Augusta “all the way to Premier Weatherill’s door in Adelaide”.

“Together we’ll shine the national spotlight on the opportunity for solar thermal and make it a national moment the country can’t ignore,” says the website of the Repower Port Augusta Alliance (photo at top) which “has developed a solid proposal to replace the coal plants with six solar thermal plants [photo below] and 95 wind turbines. 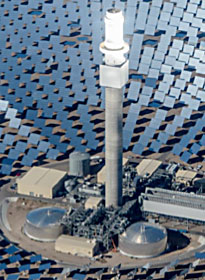 “This will create 1800 jobs, save five million tonnes of greenhouse gas emissions, improve the health of the local community and ensure energy security and stable electricity prices.”

These plants would generate 760 MW – 15 times the peak demand of Alice Springs.

Farming the Sun near Lismore, NSW, is touted as “Australia’s largest community solar energy initiative to date with more than $6.7m worth of solar power, solar hot water, solar-thermal heating and cooling systems, training of more than three dozen tradespeople, and a massive level of community awareness and education in sustainable energy.”

There are 70 community groups around the country currently trying to build and run their own clean energy projects, including solar and wind farms, according to the Community Power Agency.
More than half (47) of these groups are in Coalition-held electorates but their message is apparently not getting through to the Turnbull government.
The Prime Minister has pledged a mere $5 million towards grants to help community organisations install solar or solar battery systems, compared to Labor’s almost $100 million.
“If the Coalition was serious about supporting community organisations to access solar they would remove the main barriers that community groups face: red tape, access to legal expertise and early-stage funding. $5 million won’t deliver any of those things,” Community Power Agency’s Nicky Ison says.
“Modelling shows that spending $140 million will unlock up to $1.5 billion worth of community-owned clean power projects that will deliver financial returns back to the community.
“When it comes to innovation and investment, this government still has a way to go to turn talk into action,” says Mr Ison.
His statements were supported by other clean energy advocacy groups, Solar Citizens National and Australian Solar Council, whose CEO John Grimes noted that the meager $5 million pledge came after $1.3 billion had been stripped from the Australian Renewable Energy Agency.