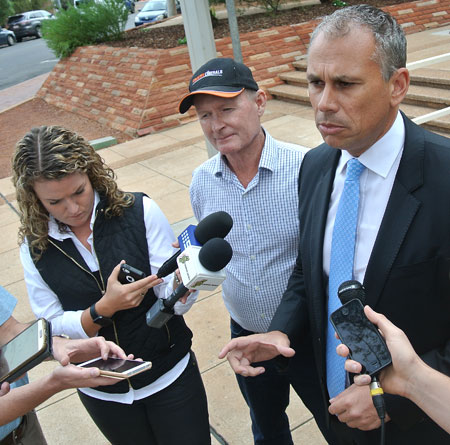 The mandatory fitting of electronic tracking devices on juveniles charged with a crime would “metaphorically be like putting handcuffs on judges,” says Russell Goldflam, the president of the Criminal Lawyers Association.

He was commenting on statements by Chief Minister Adam Giles this morning about proposed measures for young people charged with a new offence after having committed two in the preceding two years.

Mr Giles (with tie, pictured this morning with candidate for Araluen Steve Brown and a journalist) was commenting on public anger over endemic offending by young people who “go down the streets, smash 30 cars, break into shopping centres and terrorise our community”.

Mr Goldflam says making the fitting of the devices mandatory is “a slap in the face of judges, saying we don’t trust you to do the job we’re paying you to do.”

The Alice Springs News Online asked Mr Giles whether the proposal to remove the presumption of granting juveniles bail would also be an obligatory measure in the proposed amendment of the law.

Mr Giles replied: “The court system will still have the option of its determination.”

Mr Giles, speaking at a media doorstop in Alice Springs this morning, claimed as things stand, “there is no opportunity to utilise evidence of a prior conviction in determining bail”.

Says Mr Goldflam (pictured): “Mr Giles is plainly wrong. The court must take into account prior convictions and even all of the times a person has been charged.

“The court must have regard of the probability of the defendant coming to court, and in that context he or she is obliged to take into account prior convictions.

“This is as old as our current criminal justice system.”