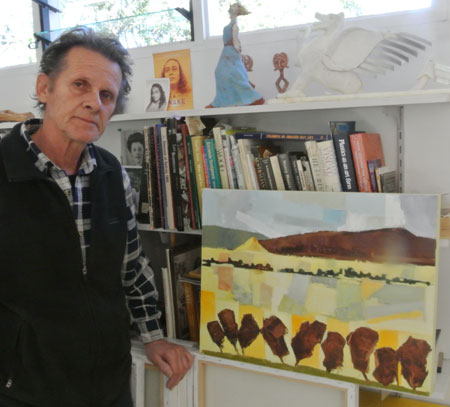 Henry Smith is always happiest in the bush: over two decades he has let it work its healing power on him and his art. We have seen the results, the intimate portraits of trees, the reckonings with the rugged country of the East MacDonnells, with its haunting, mythological quality.

If the bush was transformed on his paper or canvas, it was by the way it inhabited him as he sat in it and drew what he could see. In recent work – gathered in an exhibition at Araluen opening this Friday – the process is in reverse. The vision is his, flowing out, reconfiguring what he sees with his practised artist’s eye.

This seems to me to speak to a greater inner serenity and ease too in the landscape, by now a familiar generous friend, giving him what he needs for his mark-making, suggesting its colours, shape, lines and textures.

What is interesting in many of the works is to see this new approach working its way through the canvas: in the one frame we can see the movement from representational forms to more abstracted forms. There is still a strong resonance of the Central Australian landscape but these are places in the mind’s eye more than places you might set foot in.

Smith says he is not interested in complete abstraction yet it’s noteworthy that the abstraction is intensifying in the most recent work, which also has a sunniness that evokes the sheer pleasure he has had in making it. (On a downbeat note, it reflects too the blonding of the landscape by thick dried-out buffel grass.) 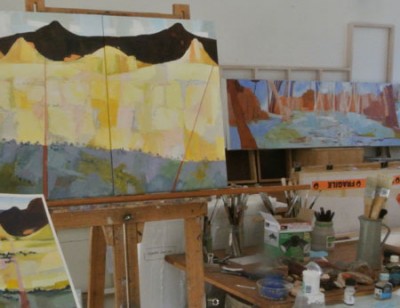 He starts with painted sketches made en plein air. Back in the studio they become bigger and with the scale things change, he plays: invents shapes, repeats them; takes one element, sets it free so that it changes all the rest or becomes ambiguous; strips trees of their foliage, straightens them like thick spears thrusting into the air; renders the sky as he does the ground, in flat interleaving fragments, dancing across the surface.

He works in series, pursuing his ideas and discoveries across several canvasses. For the viewer this is very rewarding; from canvas to canvas you can see the processes evolving.

As well as all this, there are two works of homage to Sidney Nolan’s great multi-panelled work, Riverbend (of which there are two versions, 1964-5 and 1965-66). As in the originals, the narrative elements from the Ned Kelly story are there, rendered puny, for all their drama, by the scale of the landscape, a dense, claustrophobic eucalyptus woodland ceding into a slow brown river. Smith revisions this iconic work in a Central Australian setting.

Fellow landscape artist Jennifer Taylor will open Smith’s New Works on Friday at 6pm. Smith will give an artist’s talk on Saturday, 11.30am.