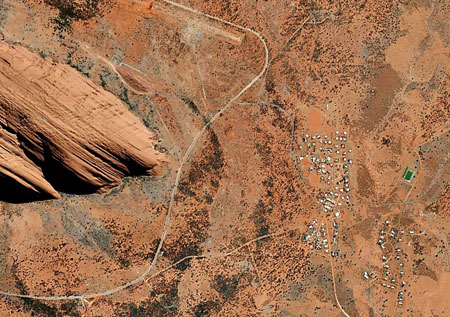 CLP Senator Nigel Scullion and NT Chief Minister Adam Giles have given only general answers to questions from the Alice Springs News Online about expenditure of some $15m in the Mutitjulu Community adjacent to Uluru (Ayers Rock, pictured).

In a joint statement they said the quality of housing in the community would be greatly enhanced through a $10m investment to build new, and improve existing, houses.

We asked Senator Scullion and Mr Giles: “Why should the people there not be told to take advantage of the plentiful job opportunities in the park and the Ayers Rock Resort, both of which they own, and build their own houses on land they also own?”

We pointed to a report that the take-up of jobs by the local Aboriginal community is minimal.

A spokesman for Senator Scullion said: “Our investment in Mutitjulu is based on our approach of working in close partnership with communities to identify their priorities for funding.

“Residents from Mutitjulu are already employed within the park and the resort and the Senator would encourage both organisations to employ more local Anangu wherever possible.”

The joint statement said the governments have also committed $2m to develop a business centre in the community, $2m to improve mobile phone coverage and $350,000 to build a new bakery in the community store.

We asked: Is there not a business centre in the Aboriginal owned Ayers Rock Resort? And is the new bakery going to be run along the same lines as the one in Hermannsburg – which has been subject to criticism?

The spokesperson for Senator Scullion (pictured) said: “Community leaders in Mutitjulu identified the need to build a local business centre.

“Details of funding for the bakery and governance capacity issues are matters for the Northern Territory Government.”

A spokesman for Mr Giles said: “There will be a tender advertised soon for new bakeries to be established in several remote communities and Mutitjulu will be one of these. It’s envisaged it will be similar to those that are currently operating.”

Mr Giles said through the joint statement that “$350,000 had been allocated for a new bakery in the community store as part of a broader partnership between the Commonwealth and NT governments to build 21 bakeries in remote communities across the Territory”.
The joint statement said: “In addition, the Mutitjulu Community Aboriginal Corporation will receive $500,000 to install lighting and toilets at the Mutitjulu oval and $250,000 to improve governance capacity in the organisation.”

We put to Senator Scullion and Mr Giles: “What exactly will the $250,000 buy to improve the ‘governance capacity’ in a place that already has the Central Land Council and a parks management board, both run with public money?”

“However, it is important to recognise that the Central Land Council and Parks Australia are Commonwealth agencies and it is vital there is a strong Mutitjulu Community Aboriginal Corporation to represent the interests of the local community.”

We asked: “How many games a year are being played on the Mutitjulu oval, which is some 17 km from the Yulara oval, and by how many people? And who is going to look after it?”

We pointed to a report that the publicly funded pool is managed by an Adelaide company.

The spokesman replied: “As with funding to upgrade any sporting oval, the number of games played on it is just one of numerous factors taken into account. Just as important, for instance, are local employment outcomes and community safety issues.”

The Australian Government has also committed to investing in adult education in Mutitjulu and is working with the community on an appropriate model to deliver better education and training to the community, said the statement.

Chief Minister Giles said, through the joint statement, the Northern Territory was also investing $2 million through a partnership with Telstra to provide the 3G mobile network and ADSL2+Broadband Network in Mutitjulu.