On the prowl for the fabled Night Parrot 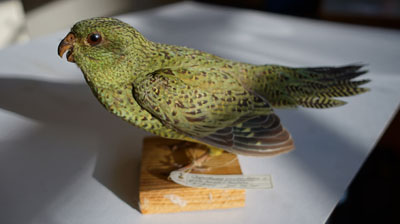 Robert Nugent, an occasional local resident, is bringing you a treasure: the world premier of Night Parrot Stories, his tribute to Australians’ nostalgia for our extinct and rare wildlife, and our anxieties about our dying ways.

With a beautifully sad sound track, it swings from reverent through whimsical, taking in the gamut of the emotions.

It is showing tonight (Thursday 5 May at 7pm) as the opening film for the Something Somewhere Festival in Snow Kenna Park, next to Anzac Oval, on the banks of the Todd, commencing at 7pm. Admission is free.

The director will take part in a discussion about the work following its screening.

Nugent is an accomplished documentarian. This offering takes us on an elegiac journey through some of the night parrot’s old haunts and our old lives, with observations from people who have heard about the bird and its legends, or even glimpsed it in the wild, dead or alive. The stories are delineated with images of excruciating beauty and sad decay. 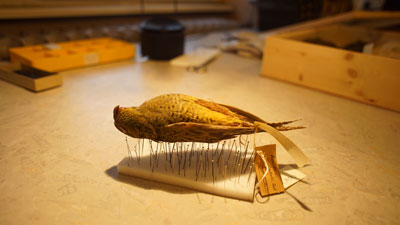 Often the sublime and the banal co-exist in the screen’s frame, at times producing a dizziness in the viewer about where we are going and what we are seeing.

During the journey, we are shown glimpses of the ephemeral, confounding delights of our arid ancient country and modern technology. It is a fascinating and poignant trip.

Nugent meditates on the parrot’s sad story, about how it disappeared from its vast desert habitats and adjoining country, pursued by cats to the brink of extinction, even as many stuffed specimens washed up on the shores of Europe’s scientific institutions. He delves into how it became the stuff of our legends.

The narrative is fragmented and intuitive. The cinematography is bloody gorgeous.

Be sure not to miss this odyssey: you may never see its likes again.