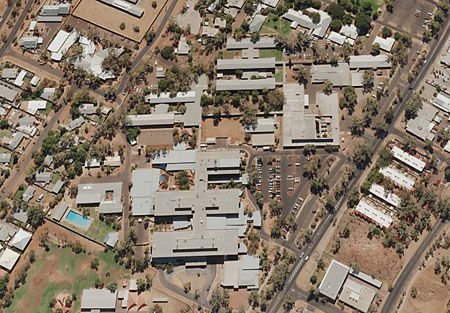 The hospital is running out of space and a new one needs to be built and be completed by 2030, says Independent Member for Araluen Robyn Lambley, a former Minister of Health in the current NT Government.

It is likely to cost $300m, by then, and there should be private enterprise participation, which had been considered during the planning of the new $150m Palmerston hospital, on the drawing board for eight years.

A potential partner, whom Ms Lambley declined to name, had offered $50m, but she says Chief Minister Adam Giles “turned his back on that”.

She said this was hypocritical given that Mr Giles sold the 100 year lease of the Darwin Port to a Chinese buyer.

Queensland Nationals Leader Lawrence Springborg was among many to advise her to on how to go about the project: “We don’t build hospitals any more,” he told her.

Her preferred model would be DBOM – design, build, operate and maintain.

The Berrimah prison will cost close to $1b and questions could be raised if private enterprise could have done it cheaper, says Ms Lambley.

“We don’t have a lot of expertise in building hospitals in the NT. Palmerston’s is the first in 40 years.”

Ms Lambley says the Alice hospital will be “nudging close” to the 50 years which is considered the normal lifespan of a hospital. It was built in 1974 when the Territory was still governed by Canberra.

It would be a good idea to have lots of space at the new site, possibly near the new Kilgariff suburb, or on the southern side of Colonel Rose Drive, on airport land, says Ms Lambley.

This may seem to be “in the middle of nowhere now” but the town is likely to grow into that direction.

The public should be given ample opportunity to express its view on location and other details, she says.

PHOTOS: The aerial photo of the hospital is from Google Earth which is not recent enough to include the new emergency department, now taking up part of the car park centre right. Part of the ED is seen at the right in the photo at top.

Sir – I've been researching NT football history for many years and I continue to do so. I have just commented on one of...
Read more
Issue 24

At the eleventh hour, the public will finally see the designs for work intended to "revitalise" the CBD. KIERAN FINNANE comments.