Home Issue 2 Cops at bottlos: how it works, and how it doesn't
Issue 2Volume 23

Cops at bottlos: how it works, and how it doesn't 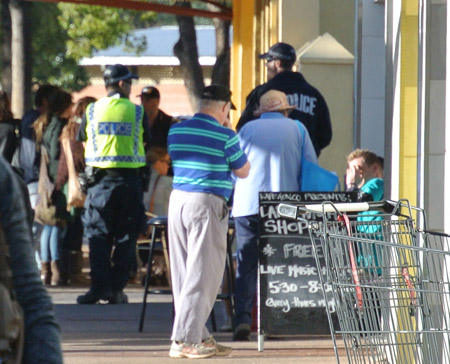 The debate about Point of Sale Interventions – POSIs for short, or cops at bottle shops – runs along two lines.

Firstly, it has been effective in reducing some crime, especially domestic violence, reflected in reduced arrests and hospital admissions.

But secondly, the measure is seen as targeting Indigenous people, especially as reported by what we are fond of calling the “southern media,” always on the hunt for reasons to beat us up over our supposed cowboy culture.

The answer is clearly not to pour out the baby with the bath water, but to make sure that a potentially tricky system is run with integrity.

The events described here are true but we have changed the names because this is not about individuals, but about an initiative to make this town a better place.

It’s not at all surprising that Indigenous people are more frequently checked and have their grog confiscated: the simple reason is that whitefellers mostly don’t live in suburbs where consumption of alcohol is prohibited. We call those suburbs town camps.

All this may change, of course, with Canberra having surrendered to the NT its control over liquor in Aboriginal areas which was part of the Intervention / Stronger Futures. However, no doubt some communities and camps will maintain their grog-free status, having fought for it long before the Intervention was thought of.

POSI confiscations almost always take place at the point of sale, when the police officer, for whatever reason, has not spoken to the purchaser on the way into the bottleshop.

It’s a mystery why there is no system in place for the products to be taken back inside, for a refund, if the police officer thinks the purchase is not kosher.

On February 20 at 7:10pm a woman – we’ll call her Freda – bought alcohol worth $357 and $64 from a supermarket bottleshop: The smaller amount was for herself, and the larger one for a friend – let’s call her Anna – living in a suburban house where the drinking of alcohol is permitted.

Freda is an Aboriginal woman from Alice Springs, who now lives in Queensland but is back home for a visit.

Freda showed the Constable at the bottleshop door her Queensland driver’s licence and explained to him that the alcohol was for a party at the suburban home of Anna where she was about to deliver the sizeable stash.

The Constable took the view that the grog was destined for a town camp, a “declared area,” and he announced that he would confiscate it.

Freda protested, pointing out again her Queensland domicile and giving Anna’s address. Anna, by the way, is the daughter of British immigrants and does not have a drop of Aboriginal blood in her veins.

The Constable now began to exercise his legal powers.

Under Section 95 of the Liquor Act he has the power to seize, without a warrant, a “thing” which he “reasonably believes to be related to a relevant offence”.

The suspected offence was the delivery of the grog to a town camp.

The issue clearly turns on the word “reasonable” which the Act does not define.

We asked a senior police officer what kind of “reasonable” circumstances led the Constable to believe Freda was up to no good.

The Superintendent listed the following facts, stored in the police database and accessible to the Constable on his tablet: In 2014 and 2015 Freda was a “person of interest” and subject of an “alert” suspecting her of bringing grog to a prohibited area.

In neither case were charges laid, let alone convictions obtained.

And two days before the grog purchase Freda gave police with a witness statement about a fracas in a town camp, where her mother lives, and where a man had threatened to firebomb a house.

These facts, according to the Superintendent, were clear proof that Freda had a link with the town camp, and it was “reasonable” for the Constable to assume she would be taking the grog there.

In the end the police destroyed the larger quantity, which Freda told them belonged to Anna, and returned the smaller amount to Freda. Go figure!

The Superintendent told us that both women have the opportunity of lodging a complaint, to the police or the Ombudsman, and if found to have been in error, the cops may have to pay restitution.

It seems a lot of hoops to jump through for someone buying drinks for a party in a place where, by the Chief Minister’s own assertion, alcohol is part of the culture.

A police patrol drove past Anna’s home on the day of the confiscation to see if there was a party. Not surprisingly there wasn’t.