The battle over our most vital resource 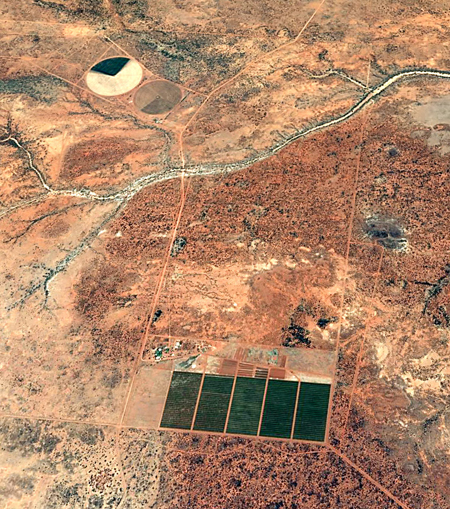 How’s this for an opening salvo: The water allocated to the Hayes family on Undoolya and Rocky Hill is equivalent to 36% of the water used by the whole town of Alice Springs.

But before you re-load, peace talks may be worth considering.

The numbers are clear: Rocky Hill, according to the Department of Land Resource Management, has an annual allocation of 3125 megaliters for the 10 years starting October 2015.

The extraction for the “reticulated potable water supply” of Alice Springs in 2014/15 was 8659ML.

The Rocky Hill allocation, according to government figures, increased from just 400ML/yr between 1996 and July 2007, to 1000ML/yr from August 2007 to October last year, when the more than threefold jump took place.

Undoolya is the cattle station owned by the pioneering Hayes family, immediately to the east of Alice Springs. Rocky Hill, also owned by the Hayeses, is an excision for horticulture used mostly for growing table grapes, on about 70 hectares (the five rectangles in the bottom of the Google Earth picture above).

Beneath that is the aquifer from which Alice Springs will get its water when the Roe Creek basin runs dry. That’s where the battle lines are drawn.

On present consumption the water resource available for Alice Springs is calculated to last 300 years. These calculations were made in 2014. Since then there have been urgent calls for exploration of water resources in The Centre, mostly ignored by the NT Government.

Taking aim from the opposite trenches is Richie Hayes. He runs Rocky Hill. The harvest is worth $4m a year – in a good year, that is.

Because the local climate ensures early ripening, Rocky Hill can put grapes on Sydney’s Christmas tables before the vineyards in most other places have even started picking.

In a bad year, like the current one, Mr Hayes is scratching to break even: in growing grapes, rain isn’t always a good thing. If it happens at exactly the wrong time, such as last December, many of the grapes are split, and the bunches must be tidied up before packing, which takes a lot more time. 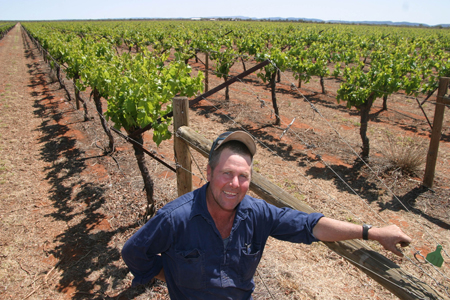 This time about half of the harvest was lost.

The next salvo of Mr Hayes (pictured in September 2011) seems to hit the spot: There is no massive increase in water allocation because the nominally new 3125ML actually consists of the 1000ML in place since 2007, plus 2125ML allocated to Undoolya for several years.

However, that quantity of water could not be used because any agricultural use of pastoral leases was limited to five years: “You wouldn’t find an investor who would clear land for maybe just three crops,” says Mr Hayes.

However, the Giles government extended that period to 30 years, and now there is a viable use for that water.

Furthermore, spray irrigation can now be used while previously it was limited to drip irrigation.

The next project of Mr Hayes is onions: The two 30 hectare circles in the top of the Google Earth picture will become 11. Although these will yield just one crop a year, it will provide a more extended work process, and may lead to a factory-like operation.

The next skirmish is predictably this: Why should one family get all that water when in town we’re told to be frugal with it. Wouldn’t it be nice to spread the benefits?

Anywhere else that would be a no-brainer: engage locals in the lucrative – $200 to $400 a day – pruning and picking.

Not in Central Australia, where the constant lamenting of massive Indigenous unemployment is as useless as it is hypocritical.

Mr Hayes has his own theory about Aboriginal men’s attitude to the kind of work he is offering: “They see themselves as hunters, not gatherers.

And although about half of the labourers working at Rocky Hill are women, it’s mostly men doing the hard work and make the better money, paid on a piece rate, per box.

The labor requirement of the vineyard is like clockwork: 100 people are needed for pruning in June for five weeks, and the same for picking at the end of the year.

Have Centrelink or the Central Land Council off-shoot Centrefarm made any efforts to take advantage of this?

“I don’t know,” says Mr Hayes. “But if Aboriginal people want to work with us they are welcome here. We have used boys from the jail. We pay the regular rates.”

For now the pickers, usually Asian or Pacific Rim immigrants, operating in professional teams, are coming from interstate.

They buy supplies in town, frequent the casino, but by and large the money they make leaves the area, half a million dollars or more a year.

Mr Hayes says agriculture and horticulture are still too small in The Centre for support businesses to be set up: “You can’t buy a tractor here.”

Farming in The Centre isn’t a lot of fun, says Mr Hayes. Electricity costs have gone up 30%. If he needs a road graded he’s got to do it himself.

Government regulations require 21 tests to be carried out on the grapes. In the US it’s more like nine and in China, one.

Regulations and supervision are huge obstacles. Mr Hayes says he has even observed that the Google Earth images of Rocky Hill are updated more frequently than those of the Alice airport some 25 kms to the west.

“Are they keeping an eye on us?” asks Mr Hayes.

Shire rates now have to be paid, without any discernible benefit from this new level of “bureaucracy”.

The water exploration activities are also back to front: The department encourages exploration drilling by the horticulturalist, and if water is found “they may give us a licence”.

“That’s not how it works, sunshine,” is what Mr Hayes says he’s told one official.

And the biggest difference between here and “down south” is the quantity of water available, and the ceaseless arguments with greenies.

At times he says he’s sorely tempted to just stick to the first part of Mark Twain’s saying.