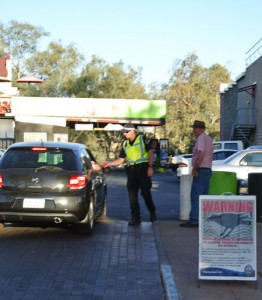 Police at bottle shops are having a deterrent effect on violent offending while mandatory minimum sentencing is not, according to a departmental review.

New mandatory minimum sentencing provisions for violent crime were introduced by the Country Liberal government in fulfilment of an election promise.

Their lack of deterrent impact is revealed in a review of the Sentencing Amendment (Mandatory Minimum Sentences) Act 2013, carried out for the Department of the Attorney-General and Justice.

The authors – Carolyn Whyte, Joe Yick, Dee-Ann Vahlberg and Leonique Swart – were able to conclude this by looking at the contrast in violent offending for Darwin, where there are no police at bottle shops, and Alice Springs, Katherine and Tennant Creek, where there are.

As is well known, even if not explicitly stated, the police beats at bottle shops – known now as Point of Sale Interventions or POSIs – target in the main Aboriginal drinkers, as it is they who, in the majority, drink in public areas and on town camps where drinking is banned and who are thus prevented by police from making their purchases.

Deterrence, by sending a message to serious and repeat violent offenders that they will serve “genuine gaol time”, was one of the aims of the new laws.

For repeat Indigenous male violence offenders convicted in courts administered from Darwin, the level of re-offending by those who committed offences in May 2013 – April 2014 was virtually identical to the levels in previous years.

For those convicted in courts administered from Katherine, violent re-offending in the last two years dropped although the decrease was not statistically significant.

For those convicted in courts administered from Alice Springs (including Tennant Creek), for offences committed in May 2013 – April 2014, re-offending was significantly less than in the previous years.

This suggests, say the authors, that the significant drop in violent offending and re-offending by Indigenous males is linked to the POSIs.

They also report that non-Indigenous males released from prison for offences committed in May 2013 – April 2014 had a higher rate of re-offending than in previous years, although the difference was not statistically significant.

Other impacts from the introduction of mandatory minimum prison terms, included:

• no increase in the overall percentage of violent offenders sentenced to prison, although it did result in changes to the type of imprisonment option used;

• an increase in the length of time and number of court appearances required to finalise defendants who pled guilty, and may have contributed to a decrease in the percentage of defendants with a final plea of guilty;

• no increase in the number of prisoners held for assault offences (the majority of violent offences).

The full review can be found here.

Gaps in bottlo policing blamed for rise in assaults.