Council row over netball stadium that may shrink 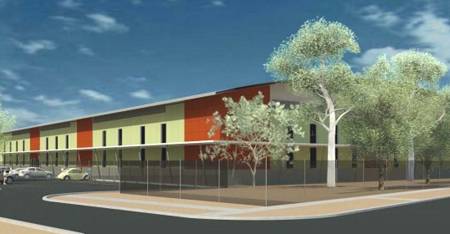 The possible shrinking of a four-court netball stadium to a two-court one sent tempers flaring in last night’s town council meeting.

The project is part of the government’s “Developing The Centre” propaganda about new facilities for Alice Springs (photo at right).

The netball stadium issue was raised by Cr Jade Kudrenko who slammed Cr Brown for having kept the council in the dark about the proposed reduction in size.

Cr Brown had heard about the possible shrinking on the Wednesday before Christmas, as a member of the sports facility committee advising the government, works director Greg Buxton told the meeting.

Cr Brown said the stadium is still an issue for the Department of Infrastructure and the next step will come when the tenders – called for a two-court as well as for a four-court facility – close tomorrow.

Cr Kudrenko said the possible downgrading was a “massive concern”. The council had engaged with the community on the basis of a four-court facility, it will be on council land, the council would contribute $250,000, and it would become a council asset.

As such the council had every right to be informed about the proposed changes as soon as they became known to Cr Brown, she said.

Cr Melky said the council’s commitment was for a four-court stadium and if there are any changes the project would need to be taken back to the negotiating table.

Cr Melky at one point said Cr Brown should not be in the chair for this discussion in case he had a conflict of interest.

Mayor Damien Ryan suggested if the facility goes over budget – $5m was mentioned – perhaps there should be a building big enough for four courts but only two with sprung timber floors initially, with the view of finishing the job later.

Cr Brown said he would be “very unhappy” with the two court option “because it would basically destroy the complex as I can see it”.

Cr Melky said the government was “misleading” the public, touting the project in its advertising.

The issue is likely to be the subject of motions at the full meeting in a fortnight’s time.

PHOTO: “The realisation of a multi-court, state-of-the art netball facility for Alice Springs took another step forward this month.” This is how the project is coyly described in a pamphlet emailed out by the Department of the Chief Minister yesterday. Of course “multi-court” can mean both two or four courts, but it could well have been a step back.

Speaking outside council today Cr Brown says he and Mr Buxton had a “stop option” on the process that was going to be invoked if the project was for any less than four courts.

This had been made clear to the advisory committee on which he and Mr Buxton are sitting on behalf of the council. The netball association, too, has two representative on that committee.

Cr Brown says the decision to call tenders – closing today – for two as well as four courts had not been made by the council, but by the department. Only it could explain why it had done so.

Cr Brown says he’d missed two or three meetings of that committee before Christmas, but Mr Buxton had been there. He had no need to inform the council as the four-court project was not negotiable.

The matter was due to come before the council once the tender price was known, as it will be later today: Either it will be within the budget, “in which case there is no story,” says Cr Brown.

If not the council may decide to contribute more than the currently agreed $250,000.

He says it’s a pity this possibility has come to light prematurely as tenderers may now have upped their quotes.

Cr Brown denies that there were any political considerations.

“I’m sure the council would not let slip the opportunity of the government spending $4.5m which is nearly double their initial offer.

“It would be political suicide for any politician to stop that project,” he says.

About the heated exchanges at Monday’s meeting, which he was chairing, Cr Brown says: “I don’t normally get flustered. I did on that occasion. Such is life, as Ned said.”