Nuke dump would raise a third of state's revenue 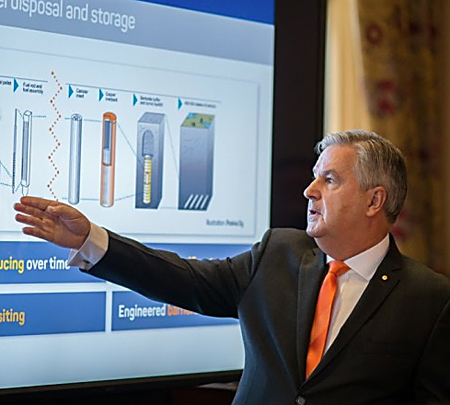 A nuclear dump in South Australia would bring “substantial economic benefits, including annual revenue to the state of $5.6 billion on average for the first 30 years of operation.

“That would equate to additional revenue of about $3300 per person per year and is equivalent to approximately 34 per cent of [the] current state government revenue of $16 billion a year.”

This is reported this morning in the Adelaide-based online newspaper InDaily as the Federal Department of Industry, Innovation and Science is briefing Alice Springs journalists about a site 75 kms south of the town, one of six potential sites “volunteered by landowners, and which met basic geological, climate and other criteria.”

A town hall style meeting will be held by the department at 6pm tomorrow in the Andy McNeill room.

InDaily is reporting the provisional findings of Royal Commissioner Kevin Scarce (photo by InDaily) who, in his report released today, said there would be an additional $2.1 billion benefit for each year of the 43 years [after the first 30], with a high-level storage facility potentially operational in the late 2020s.”

He is referring to “storage and disposal of used nuclear fuel” meeting “a global need” whereas the discussion in Alice Springs has centered on domestic waste.

InDaily reports Commissioner Scarce outlined a plan for a “State Wealth Fund” of $445 billion, which could grow at “more than $6 billion a year for more than 70 years”.

The Federal Government, for its low to intermediate level storage facility, received 25 “eligible nominations” of sites around Australia, including three in the NT (two in the Top End).