Alice to Venice: a tale of two workshops

It’s a story of two Alice Springs workshops starting small but thinking big, then joining forces to achieve an outstanding result – designing and making a set of stylish, immaculately finished chairs that will help stamp a national character on the Australian exhibit at this year’s Venice Architecture Biennale.

One is Elbowrkshp in Hele Crescent where designer Elliat Rich works alongside her partner, bespoke shoemaker James B Young. The other is the Enterprise Workshop of the Centre for Appropriate Technology (CAT). In a sense both are about creating economic opportunities with a uniquely Central Australian flavour. 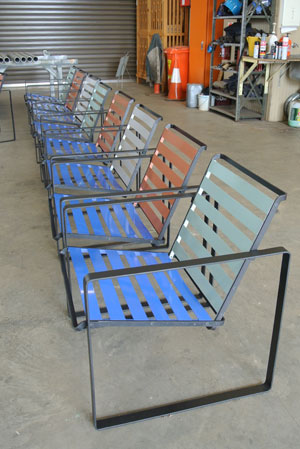 Elbowrkshp is the kind of small creative enterprise associated with the inner suburbs of our major cities, where sophisticated affluent populations respond to products that go beyond surface appeal and function, that have a story to tell of how they were made and why. The Central Australian story in everything they make gives the work of Rich and Young a unique edge, appealing to a geographically fluid clientele – local, national, international – with a keen interest in the natural and social environment of the Centre.

The CAT Enterprise Workshop builds on a three-decade record of fabrication, but has diversified from making specialised products for remote communities to taking niche products to external markets. To date these markets have mostly been at a regional level. The Anerle-Aneme chairs take them into new territory.

The bottom line for the Enterprise Workshop is jobs for Aboriginal people. The model is job first, rather than training first. Training is built into the production process of items for which there is a market. CAT is a not-for-profit organisation but everything they do has to cover its costs. There is no longer block government funding for their activities.

The workshop still makes the CAT classic lines: the woodchip water-heater, the drum oven, the digging stick. In fact the digging stick, coming in a number of sizes, is their biggest-selling item, some 700 to 800 a year for the last 30 years! (That’s more than 20,000 sticks – what becomes of them all?) 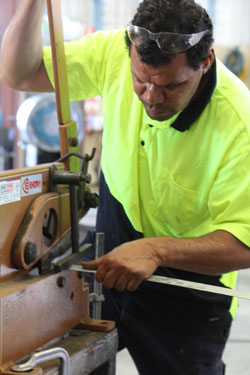 These are the products flowing into communities. The products flowing out to new markets are things like tourism infrastructure items – robust bench seating, walkways, handrails, barbecues with a plate on a swivel arm. The very latest (apart from the chairs) is the support framework for the remote area low tech mobile phone hotspots innovated by CAT. Twenty-two of these will be installed across the NT over the next two years, in a project funded by the NT Government.

The chairs destined for Venice take the Enterprise Workshop into the different world of high-end design. This is not their first joint project with Rich: they collaborated on the 1888 Benches commissioned for the Todd Mall redevelopment (below right).

Local manufacture is part of Elbowrkshp’s ethos, says Rich. Meeting the challenge of constraints in skills, capacity, materials and costs while producing an object with a contemporary aesthetic and finish able to “talk to the high-end market” is all part of the process.

The chair in fact came before the benches, whose design brief, from architect Susan Dugdale, was based on an early prototype of the chair. Its coloured metal slats, cut from recycled car bonnets, were put to different use in the benches. 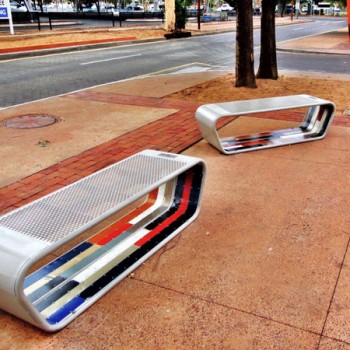 Sourcing the car bonnets and processing them proved too time-consuming for the chairs project. The light-weight flexible slats now being used are made from zinc anneal, powder-coated in a colour range commissioned especially for the Venice exhibit. The commission brief and budget resourced the vital research and development phase that goes into a refined final product, says Rich. Without it the project probably couldn’t have happened.

Cutting and drilling the slats was quite a painstaking task, says Aaron Burdett, who has been employed at the Enterprise Workshop for three and half years. Four templates guided the precision cutting, while two jigs were used for screwing and welding the slats to the seat and back frames. There was some trial and error: “It was a lot of good experience, you keep learning from your mistakes,” says Burdett.

There was cooperation with other local workshops too – Ross Engineering for the small bends and curves that do so much for the elegance of the form; Alice Powder Coating for the colour finish.

Burdett is quietly proud that the work is destined for an international exhibition: “It’s good for the workshop,” I say; “Good for us too,” he says of himself and his co-workers. 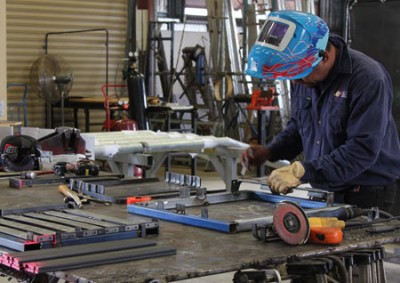 He came to the workshop from Loves Creek Station, where he was a stockwork supervisor. He likes the CAT job: “I live just down the road”, so it’s handy, and “it’s a pleasure working with the younger fellers”.

Left: Phil Coombe using a jig to guide construction of the seat.

They’re all younger than him. He’d like to see them go on to become fully qualified: “It’s their future.”

That’s how Bruce Williams sees it. He’s 19, going on 20, a young dad. He was in Karratha, with his Western Australian partner, looking for work without success. He’s been at the CAT workshop for four months now, working six hours a day. “I’m hoping to get a full-time job,” he says.

The story of the collaboration between Rich and the Enterprise Workshop will be one of those told in Venice. The theme for the Australian exhibit is ‘The Pool’. The chairs will be arranged around an actual swimming pool in the Australian pavilion, as well as in the garden space (below left, picture by John Gollings, from AIA site) and on the deck that overlooks one of the canals for which the city is known. They will be an invitation to “sit a little while” – the meaning of their Arrernte title. 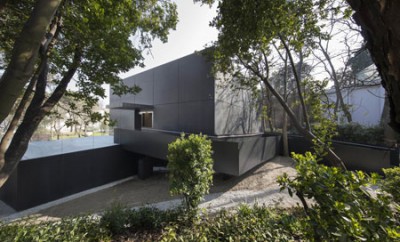 The experience is designed to be totally “immersive”, says Isabelle Toland of Aileen Sage Architects, one of the three young female creative directors for the exhibit. There will be music (composed by Bree van Reyk, who happened to be Rich’s collaborator on the Melody Fence at Ross Park School), a lighting design, scents such as that of wet bush after rain, and stories, available both as audio and text. The chairs story will feature in a broadsheet which visitors will be able to read as they sit in one of them. It will also be on a souvenir postcard.

Other stories, that will be listened to in the space or read in a soon-to-be-published book, have been gleaned from eight of Australia’s “cultural leaders”, among them stars of the pool Ian Thorpe and Dawn Fraser, but including less obvious choices such as Tim Flannery, Christos Tsiolkas, Anna Funder, Paul Kelly. Strengthening the NT connection will be Hetti Perkins, telling the story of her father’s involvement in the 1965 Freedom Ride and its famous action against segregation at the Moree pool, as well as stories about swimming pools in remote NT communities. 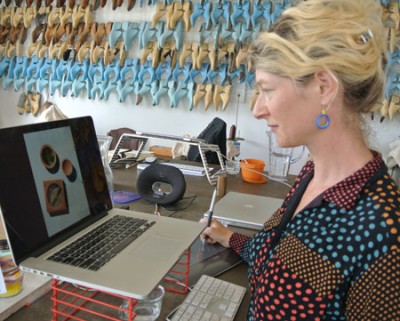 Toland says the aesthetic of the chairs fits beautifully with the design of the new Australian pavilion, inaugurated at last year’s art biennale. (Its lines and forms are simple, clean, bold.) This was one reason for their choice; the other was the collaboration between Aboriginal fabricators and a non-Aboriginal designer. This spoke to the biennale’s “social agenda” of “talking to people outside the architectural realm”.

Biennale curator, Chilean architect Alejandro Aravena, puts it like this:

“More and more people in the planet are in search for a decent place to live and the conditions to achieve it are becoming tougher and tougher by the hour. Any attempt to go beyond business as usual encounters huge resistance in the inertia of reality and any effort to tackle relevant issues has to overcome the increasing complexity of the world. 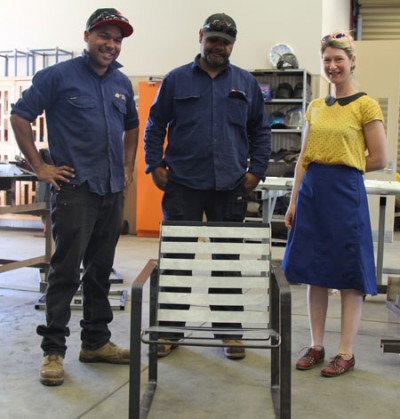 “We would like this ‘Report from the Front’ not to be just the chronicle of a passive witness but a testimony of people that actually walk their talk.”

In that context, the Anerle-Aneme chairs and the collaborative process behind them are a perfect fit.

Left: Phil Coombe, Aaron Burdett and Elliat Rich  at an earlier stage of the process. This photo and those above of CAT staff at work courtesy Metta Young.

What future for them after Venice? Both CAT and Rich are keen to explore the market for new commissions.

“We see this as something that will grow,” says CAT manager Metta Young. The workshop has some capacity to expand on site at the Desert People’s Centre. It would be a matter then of getting the right mix of people, skills and machines to able to respond to commissions.

Rich says finding a distributor would be crucial and development of a complementary product, such as a small table, probably necessary.

On all fronts, the international exposure at Venice certainly won’t hurt!