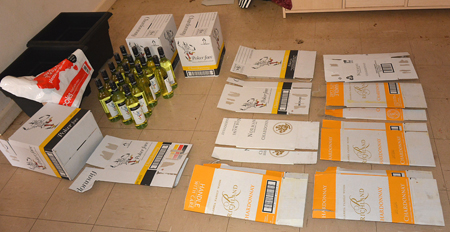 Police are calling for witnesses following the attempted sexual assault of a 30-year-old woman in the early morning of Monday, February 1.

Detective Sergeant Lewis Chown said the incident occurred around 12:30am in the vicinity of the Trevor Reid Park on Wills Terrace.

“Police also allege the woman was assaulted a number of times between Schwarz Crescent and Railway Terrace.

“The alleged offender is described as male, of indigenous appearance aged in his early twenties with a medium build. He was wearing blue denim shorts and no shirt,” says Det Chown.

Meanwhile police have seized a large quantity of alcohol (above, right) from a private residence in Alice Springs.

“Evidence of illegal trading following the discovery 30 empty cartons will also be alleged.

“A quantity of cannabis was also located at the premises.

“Police suspect that the alcohol is on-sold, which could return a potential yield of several thousand dollars.

“A 34-year-old man and a 23-year-old woman will be summonsed to appear in court at a later date,” he said.

Police are also calling for public assistance following the theft of a firearm overnight.

Superintendent Peter Gordon said the rifle was stolen from a vehicle on Caterpillar Court.

“Between 7.30pm yesterday and  6.15am today an unsecured Ruger Imperial bolt action .308 calibre rifle, which was inside a canvas cover, as well as a quantity of ammunition, were removed from a vehicle by unknown offenders,” he said.

The rifle is silver / grey, has a black plastic stock with a silver rifle scope attached, a four round magazine (empty) and a box of 20 x .308 calibre ammunition is also missing.

“The owner of the firearm will receive a notice to appear in court at a later date, in relation to failing to secure the firearm and ammunition,” says Superintendent Gordon.