NT Govt: We were mum on port lease to China

A spokesman for Chief Minister Adam Giles today confirmed that no public announcement had been made about the $500m 99 year lease of the Port of Darwin to a Chinese company before Mr Giles announced the completed deal on October 13 last year.

The spokesman also dismissed assertions that the Federal Government could overturn the deal on the grounds that the NT is not a state.

And he would not disclose who – in addition to Landbridge, which was later found to have links with the Chinese government and military – made the other two “binding” bids received by the government, nor how much they offered.

The spokesman, Travis Crozier, Director Communications of the Department of the Chief Minister, today responded to questions we had put to Mr Giles on January 5. We present here the questions as we had formulated them, and how Mr Crozier answered them.

NEWS: Please provide me with a copy of the Landbridge lease document.

CROZIER: The lease is registered and is publicly available through the NTLIS (Northern Territory Land Information System).

NEWS: Is there a provision to extend the lease at the end of its expiry after 99 years?

CROZIER: There is no provision for extension at the expiry of the 99 year term.

NEWS: Are there limitations placed on the uses and future development of those parts of the harbour that are not under lease to Landbridge, and that could be in competition with it?

CROZIER: The Port is critical strategic infrastructure supporting the Territory’s economic development and trade growth, any future development within the harbour would be considered under normal development guidelines.

NEWS:  You announced developments and investments to be made by Landbridge … “expanding its port capacity to in excess of 200 million tonnes per annum – more than 65 times the current volume at the Port of Darwin” … “Landbridge will immediately commence design and preparatory works to increase refrigerated container capacity”. Are these enshrined in the contract as obligations imposed on Landbridge? What is the text in the contract relating to this?

CROZIER: No, this is a commitment from Landbridge but is in the best interests of the Northern Territory.

NEWS: Do you regard the statement by Mike Hughes [of Landbridge Industry Australia Pty Ltd] as a binding commitment: “We plan on making considerable financial investment in the Port of Darwin. In addition to committing an initial $35 million of new growth investment expenditure over the first five years, we anticipate in excess of $200 million of capital expenditure over the next 25 years. Given the scope of development opportunities in the Territory, we hope to invest a lot more.”

NEWS: Are there conditions for the lease to be terminated prematurely and if so, how is this expressed in the lease agreement?

CROZIER: There will be regular review by Government and this is outlined in the lease document.

NEWS: Are foreign workers to be admitted to Australia under the agreement with Landbridge? If so, what is the text in the contract relating to this?

CROZIER: No, the NT Government has no jurisdiction over immigration and employment laws.

NEWS: Are any foreign workers being paid in China or here? Will Australian unions have access to information relating to these payments?

CROZIER: We have no visibility as to whether any foreign workers are being paid in China or Australia. That is a commercial matter for Landbridge.

NEWS: You say: “We have listened carefully to the concerns of the community and the Parliament.” Where, when and how did this listening take place, what were you told by the “community” and what did you respond?

NEWS: When and how was the public of the Territory informed about planned commercial arrangements for the port, except in these media releases:– Feb 2014 (investor sought), Oct 2014 (ALP support), Feb 2015 (Port Inquiry unanimously supported by Parliament) and Sept 2014 (Darwin Port trade results bode well for the Territory’s economic future).

CROZIER: It is standard practice for the public to be informed through the media. A full list of media releases can be found here.

NEWS: Who proposed the 99 year lease?

CROZIER: See recommendation of the Select Committee. [See also our report containing references to the committee.]

NEWS: Was a tender called? If so, when?

CROZIER: There was a two stage tender process.

NEWS: When and how was the public informed that a foreign company had offered to take out the lease?

NEWS: When and how was the public informed that the NT Government planned to accept Landbridge’s offer?

NEWS: Notwithstanding the statement by Landbridge on November 13, did you discuss with Mr Richardson [Defence Department secretary Dennis Richardson] merely issues of access to the port by the Australian Navy or did you discuss geo-political and strategic issues as well? It seems that senior Federal politicians, before your announcement as a fait accompli, were ignorant of the existence and details of the lease. The statement suggests Landbridge talked only with the Department of Defence and the Foreign Investment Review Board. The latter is a non-statutory body that advises the Government on foreign investment policy and its administration. As such the FIRB cannot approve, only recommend.

CROZIER: The Commonwealth Government was appropriately engaged as Mr Richardson and Mr Donnelly [Rob Donnelly, Foreign Investment Review Board] were both advised.

NEWS: What enquiries did you make with the Federal Government and its entities (which ones), including Defence, about the granting of the lease to Landbridge; when; what did you tell them; and what did they respond?

CROZIER: The Commonwealth Government was appropriately engaged as Mr Richardson and Mr Donnelly were both advised.

NEWS: From your perspective, is the following media report accurate: “On Tuesday Defence Minister Marise Payne revealed she and her department learned a Chinese company had won a 99-year lease on Darwin’s commercial port ‘a few hours’ before the contract was announced by the NT Government on October 13.”

CROZIER: Defence were informed of the arrangement.

NEWS: Apart from Landbridge, how many applications did you get? 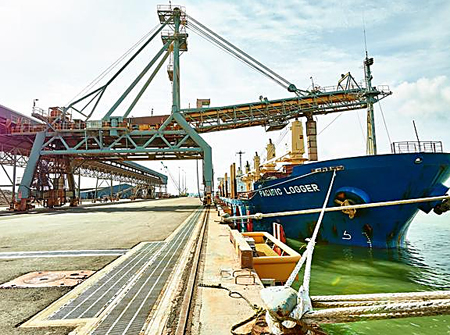 NEWS: What were the respective three highest offers?

NEWS: Who made these offers?

NEWS: The Federal Government can override Territory legislation because we are not a state. Can this apply to the lease? Can it be terminated by the Federal Government? Minister Payne has referred to the option of declaring “a contingency” under the Defence Act.

CROZIER: The Defence Act has precedence at various times.

NEWS: On November 25, 2015, the Senate referred an inquiry into the foreign investment review framework to the Senate Economics References Committee for inquiry and report by February 4, 2016. To your knowledge, will the port issues be discussed?

CROZIER: Matter for the Senate.

NEWS: In the case of a cancellation of the deal, would there be any grounds for Landbridge to seek compensation?

CROZIER: The Northern Territory Government has entered into a 99 year lease of the Darwin Port to the Landbridge Group.

NEWS: If so, who would pay?

CROZIER: Not applicable. [The Alice Springs News Online finds this reply surprising. Professor Rolf Gerritsen has stated that the Federal Government has the power to knock the leases on the head and Mr Crozier himself has stated here that “the Defence Act has precedence at various times”.]

NEWS: The 2013/14 annual report of the Darwin Port Corporation says, in part: “Darwin is one of Australia’s strategic defence ports and the Corporation continues to build ongoing strong relationships with defence stakeholders and provide access and services at Fort Hill Wharf for increasing numbers of visiting Australian and foreign flagged naval vessels.” Will this continue under the new operator?

CROZIER: Yes. The NT Government and the Department of Defence expect no change to existing arrangements.

NEWS: “The Port of Darwin is identified as a strategic Defence port in the National Port Strategy and, as such, the Corporation attends Defence exercise briefings, like Kakadu, and works closely with Territory and federal government agencies to ensure appropriate security arrangements are in place for visiting Australian, allied or foreign flagged naval vessels.” Will this continue under the new operator?

CROZIER: Yes. As above.

NEWS: “Attendance at Port User Safety Meetings has continued to grow since being introduced by the Corporation in August 2012 with at least eight standing members from key industry sectors including stevedores, Defence, oil and gas, fuelling and agents meeting every two months.” Will Defence continue to attend such meetings under the new contractor?

NEWS: “Over the last six years nearly 16 million tonnes of bulk minerals have arrived at East Arm Wharf by rail for export, with an average of 24 trains currently arriving at the port each week. Sidings along the rail corridor benefit a number of mining operations and this is proving a positive selling point for the Corporation in attracting new Port users. Along with facilitating the expansion of trade to Asia the rail line is also being increasingly utilised by the Australian Defence Forces for the movement of equipment to bases in the north and for deployment overseas via the Port.” Will any changes be made to this under the new contractor?

CROZIER: The port will continue to be a focal point for growing the NT economy.

When asked for comment on the issues raised in this report, a spokesperson for the Department of Defence said it had no comments further to the ones made previously [and were reported by the Alice Springs News Online] except this:

“Regarding the Darwin Port User Safety Committee, this is a quarterly meeting which is convened by the port operator to discuss work health and safety related issues. As a significant port user, Defence is represented by the Command Safety Advisor from HMAS Coonawarra, who will continue to attend in the future.”