I was working for CAAMA in the early 80s, with the late Rodney Gooch (see Rodney Gooch’s UTOPIA) at the old Gap Road Youth Centre in Alice Springs when Doris Stuart was a pioneering Arrernte art advisor and Curator.

One day Rodney held up a couple of 90x120cm canvasses by Emily Kngwarreye, who came in from Utopia with her latest work – vivid, large brush “dump dump style” wildflowers. You should buy one of these, he said.  They were $600 each, but I was in rock ‘n’ roll which was a much leaner business.

A lot of water has passed under the bridge since those days, but quite a few artists asked for advice on selling their paintings. I got involved in the business side of that for a while, including commissioning paintings for interstate galleries and a Melbourne dealer who made known his gangland threats if the artists didn’t comply during his short stays in town.

The artists re-sale royalty and changes to superannuation had a dampening effect on Aboriginal art sales, but when you’re mid-career as an Indigenous desert artist, shifts in the market are not immediately perceived.

It took a few years for the slow-down to occur, most spectacularly around the GFC, retrenching many a mystified artist to the overcrowded house / unit that they’d been able to rent.

Landlords, backpacker and motel keepers did well from the surge in artists drawn to Alice Springs. Part of the current slowdown in the town’s commerce can be attributed to those halcyon days eventually going off the boil.

The movement, like a metamorphosing cicada, looks to emerge in splendour, but the crazy days of the tsunami that began as Western Desert Art was unsustainable. This is not to discount the formidable urban Indigenous art, but as in the music that mushroomed, it was a major contribution to a cultural renaissance.

Freight companies profited as canvasses whizzed around the country and art supply shops prospered, as did automobile dealers who supplied vehicles to cashed-up artists.  The art centres continue to direct the Aboriginal Art movement which employed and employs gallery owners and staff throughout Australia and overseas.

Art, of course, is not that different to rock ‘n’ roll as a business model and we culture vultures love it, but having worked closely with many musicians and painters for a decade or two, I can vouch for the fact that it’s easy to be holier than thou from afar when making judgement calls on alleged tax minimisation.

“My job (as my predecessors found) is a very arduous one.  It is one of absurdly long hours and long, dusty drives,” says Andrew Crocker, former Papunya Tula art advisor, quoted in Judith Ryan’s book Mythscapes.

“Circumstances of camp life conspire to ruin a masterpiece in a trice. Unsaleable work must be tactfully haggled over using European criteria where they are not necessarily appropriate.  Hours are wasted in Alice Springs battling outrageous demands … from inebriated Aborigines.

“Some sectors of the European community, in turn, display not a little intemperance and resentment towards … projects which involve them.”

Most art centres began as government-funded start-ups to some degree, with the exception of Papunya Tula, and introduced a new cash economy to the Indigenous world.

In this robust and buoyant situation, many artists became independent of welfare, until the crash. Some made a small fortune over many years, but institutionalised obstacles such as Alice Springs banks requiring a taxation record and employment history before qualifying for a modest housing loan, kept them from being able to enter the residential market.

Without the phenomenon of the post-1970s contemporary Aboriginal art movement, welfare costs would have been much higher among a largely remote and disadvantaged population base. The money earned from painting was transacted locally, much of it ending up in the hands of liquor outlets, in town and bush roadhouses.

As the cost of welfare is predicted to spiral upwards, start-ups like those of the art centres become economically feasible and this is one very good reason why the proposed Aboriginal cultural centre in Alice Springs deserves close scrutiny by the various stakeholders.

“Art has become the bridge of communication and commerce out of which has grown non-Aboriginal appreciation of the land and Aboriginal access to cosmopolitan goods and services,” says Frank Brennan, as quoted by Rosemary Crumlin and Anthony Knight in Aboriginal Art and Spirituality. 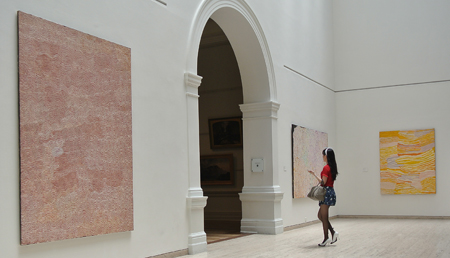 “It is a strong bridge across the cultural gulf of different worlds.  It is a new way of talking the history and acknowledging the present – a way that does not threaten the descendants of the European colonisers and that need not undermine the integrity of the Aboriginal landowners who have been dispossessed. It is a way of sharing the land through understanding and respect.”

In the pre-art centre days, artists traded their boards and canvasses for food and fuel, up and down the track between Adelaide, Darwin and Mt Isa as well as in the supermarkets of Alice Springs. They still do.  More than a few, particularly the Papunya acrylics and the Hermannsburg watercolours are worth a zillion times what they were on the secondary market.

I’ve come across some of these covered in fine white dust in underground spaces in Coober Pedy and heard owners tell of an Albert Namatjira which was mistakenly thought a print. Once, at Papunya, an old man offered me a painted board for a lift into Alice, but I declined and gave him a ride anyway. His company was priceless. He later gave me a lesson in art.

“It is hard, even now, to understand how those first sights I had of the extraordinary sand-writing should have become an art-perception which seemed to embody all the great visual and gestural imperatives of the twentieth-century modernism in painting,” says Geoff Bardon, quoted in Mythscapes.

In my days of tending the store, some people have asked how much the Aboriginal artist makes from a painting.  My reply is always to go and ask them.

Often, it is those who are asking who want a bargain, rather than pay what the painting is worth. Many people have at least one Aboriginal painting that they adore, hanging either from a coat hanger or a hook on the wall of their shanty or mansion.

“Oenpelli art does not have the objective reference of modern western painting.  It is more like the Russian ikon or the religious paintings of the Italian masters, where the artist is free to interpret a subject within a religious context,”  said Gavin O’Grady in the Nation Review of December 1979.

One man, from out on the Barkly, was among a group of Aboriginal artists who were commissioned to paint a QANTAS 747.  He established his own outstation and drew his family together.  Now passed on, I am fortunate to have one of his landscapes, learned, he told me while working as a stockman near Hermannsburg.

Recently, I watched as non-Indigenous women tourists purchased a bead necklace and tried it on before a mirror. Delighted, they walked out of the shop and I observed the same look on the faces of the Aboriginal women who had made them. Aboriginal Art is one of the great gifts to the world, like Afro-American music.

Russell Guy is the author of Dry Crossing, a novel set largely in the Outback, published by Boolarong Press, Brisbane.

PHOTOS taken today by ERWIN CHLANDA in one of the nation’s most prestigious galleries, the  Art Gallery of NSW in Sydney, where a dozen Central Australian painters are being celebrated. FROM TOP: The huge canvas “Jupiter Well to Tjukala” by Uta Uta Tjangala from Kintore dominates one room of the gallery • Visitors arriving in the great entrance hall pass by the “Awelye for the mountain devil lizard (21 women)” painted in 1996 by Utopia’s Gloria Tamerre Petyarre • 30 years ago Warlimpirrnga Tjapaltjarri, from Kiwirrkurra, as a member of the “lost tribe” in the Western Desert, had his first contact with people outside his small family group. Today his paintings are celebrated around the world, a large one hanging at left in the photo, while the work at right is by Makinti Napanangka, of Kintore • Kiwirrkurra paintings dominate the entrance hall.

‘Dry Crossing, a novel by Russell Guy, is published by Boolarong Press, Brisbane, and available at local bookstores.