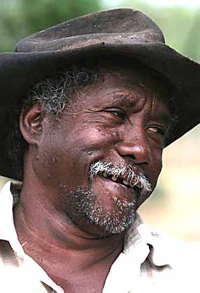 I rang him to discuss the likelihood of fracking on his property in the wonderful Borroloola area, where the mighty Roper River flows into the Gulf of Carpenteria, and where Alice Springs fishers cast their line.

His response: “I’ll call in ISIS if they do. If the politicians want gas there is enough coming out of their rears.”

I asked him if he had a computer. I was exploring the possibility of getting some images emailed.

The answer: See at top.

“Are you Indigenous?” I ask. “Well, I’m pretty bloody black.”

The metric conversion has passed him by: How big is the station? “888 square mile.”

How many tourists do they get a year?

“I can’t tell you. Scott Morrison would dig into my pocket.”

But there is a lot more to Mr Shadforth than being a tough guy from the bush: He’s created an operation of a kind that could contribute massively more to the Development of the North than gas – fracked or otherwise.

The  NT Government is hell-bent on letting mining companies have Territory gas for 10% of its value.

And that 10% royalty will go to a government notorious for its incompetence: Per head of population the NT requires five times as much money as do the other Australian jurisdictions (not even counting the money allocated for Aboriginal people). That reduces the value of the royalty to 2%.

Mr Shadforth on the other hand has transformed Seven Emus Homestead, adding a tourist business to the cattle station – the kind of “product” overseas tourists looking for the real Australia are hankering for.

“It’s a normal, simple life,” he says, lots of outdoor adventure. Some of the world’s greatest fishing. No grog.

The station has employed 18 “woofers” from overseas – Willing Workers on Organic Farms in recent times.

The land was taken up by Mr Shadforth’s father, William, as a cattle station in 1953.

Frank took it over 16 years ago. He has a son, a daughter, two granddaughters and thee grandsons – the fourth generation on Seven Emus. (By the way, grandson Wade is fully up to speed on the station’s satellite internet service, even if his grandfather is not.)

Seven Emus is 100 kilometers by road east of Boroloola, on the banks of the Robinson River. From there it’s one hour by boat to the gulf.

Swimming is not recommended: “We have crocodiles. Any size. You can go in ankle deep – knee deep at the most,” says Mr Shadforth. 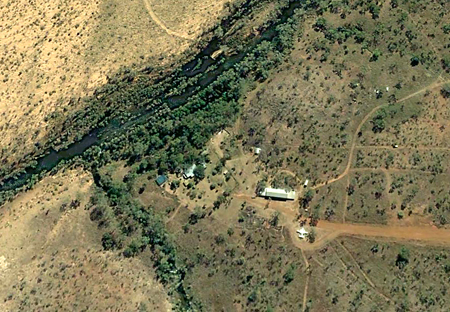 But fishing doesn’t get any better: barramundi, queen fish, trevally, silver brim, barracuda, jewsfish, sweet lip, stingrays, sharks – “how long have you got?

Mr Shadforth is now worried that the massively water intensive fracking industry will endanger the little paradise he’s built up, especially in a dry year. He says the worry is not just the amount of water used by the miners, but the possible contamination of the station’s supply.

He’s adamant that fracking should be happening only with the consent of the land holder – but he knows he’s fighting a losing battle.

He says the newly required agreements are a farce – they don’t provide a veto right.

In a way his family are double losers: They hold the land under a perpetual pastoral lease from the NT Government. They do not have the same privileges as other Aborigines owning land under the Aboriginal Land Rights Act – some 50% of the NT landmass: Those owners have a veto right to mining and if they do a deal, the Alice Springs News Online understands they get royalties of at least 10% of the wellhead price.