Two years after losing all its government funding the Arid Lands Environment Centre (ALEC) has re-invented itself as a self-supporting organisation capable of pulling a big crowd.

It demonstrated that again this morning when it staged the contribution of Alice Springs to the Global Climate March, as the focus is on Paris again for the biggest global climate talks of the decade.

Some 300 people, many of them children with their parents, enjoyed games and stalls on the council lawns, and listened to speeches and to music.

ALEC has been around for 35 years and won’t be beaten by the vagaries of public funding, says Nicole Pietsch (pictured), the organisation’s spokeswoman and one of three staff – all part-time – holding the group together.

Events like today’s appear to be attended by the usual suspects: “Maybe,” she says, “but we’ve emailed 100 different community groups around town, even for people who don’t turn up there’s been a lot of information going out there.”

What are the initiatives that town is making on global climate?

“ALEC is not only raising awareness but contributing to policy submissions into major planning issues, initiating sustainable projects, such as Cool Mob and Alice Water Smart. Sure, their funding is finished for now but that’s not the end of that story. There are ongoing conversations.

Ms Pietsch says in the absence of government funding “it comes back to the community. Crowd funding is one way, there are co-operatives. We have to educate ourselves.” 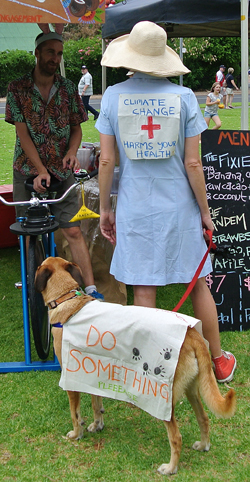 That doesn’t bring in dollars but ALEC’s enterprise arm does – increasingly so. Its Arid Edge Environmental Services is working – for a fee – on landscaping, water and waste efficiency, and permaculture – “consulting and doing it,” says Ms Pietsch.

At right: Barb Molanus and Sasha, with a message.

“It’s four people, and that’s actually more than the current staff of ALEC itself.

“They have contracts in places like Utopia where they are putting in community gardens in homelands. They’re doing water and energy efficiency audits around town, landscaping services, garden tune-ups, checking irrigation.

“They’re working towards doing stuff with the Green Army Projects.

“We’re still open, and that’s because the community has gotten behind us with donations.”

ALEC has withstood periods of no government funding before.

Like the local Frack Free Alliance, allied groups “are all volunteers, contributing hours of their week, and we have incredibly raised that issue in the Northern Territory.

“Volunteer effort is the way most of the Green movement has always worked because people care and it’s not motivated by making money – looking after the planet, looking after each-other as humans. Caring about the world.”

Meanwhile the national Lock The Gate Alliance says in a media release that on Friday, energy ministers from every Australian Government will meet in Canberra to discuss whether landholders should have the right to refuse access to mining and gas companies.

“Currently, we have no legal rights to prevent mining and gas companies forcing themselves on to our land, damaging our water resources and putting the health of our families at risk,” says the release.

“This vast injustice has led to entrenched conflict and caused many families to suffer heavily at the hands of multi-national mining corporations.”