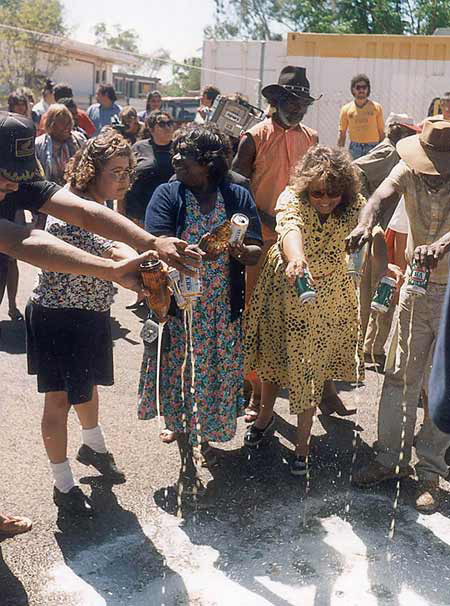 Dramatic reductions in Alice Springs in alcohol consumption and alcohol related family violence assaults are likely to feature prominently in next week’s public meeting about control measures in the next two years.

The draft Alcohol Management Plan 2015-2017 released last week reports that people in Alice Springs drink alcohol at a higher per capita level than the national average, (Australian average is 9.7 litres pure alcohol consumption per person, NT is over 13 litres), but “significant progress has been made in reducing alcohol harms”.

“During the 2014 calendar year the total wholesale supply decreased by 10%.

“The level of alcohol related family violence assaults for the same 12 months period as compared to the previous 12 months has also decreased by 23.2%.”

The meeting will be held next Wednesday at 5.30pm in the Andy McNeil Room, Alice Springs Town Council Chambers.

PHOTO: Tipping out alcohol when the Congress Shop surrendered its liquor licence in 1990.