Comfort, not just speed, is aim of solar cruisers

It was a tight field when the Cruiser Class in the World Solar Challenge set off from Alice Springs this morning, in the the same order as they arrived yesterday.

That class, while a little slower than the spartan single seaters likely to win the event, are causing a great deal of excitement along the 3000 km race from Darwin to Adelaide: These vehicles are are getting close to practical use – traversing the continent exclusively on solar power at speeds of around 100 km/h, and carrying up to four people.

The Japanese team from Kogakuin University in their solar car Owl were first under way in a catamaran shaped car designed for aerodynamic performance (above). 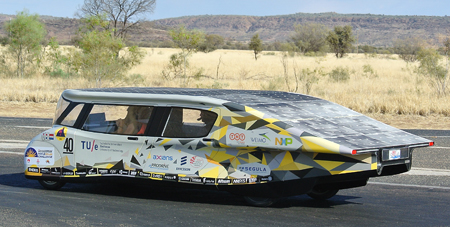 Second to do the right-hand turn towards Adelaide, just south of Alice Springs, were the Dutch team Eindhoven  in their four seater family car, Stella Lux (at right).

Yesterday that team claimed a record for the first solar family car to drive 1500 kilometres on a single charge, at normal speeds.

“This achievement signifyies that the age of practical solar cars is here,” says a spokeswoman for the race.

“Stella Lux is an intelligent, solar-powered family car that generates more power than it uses.

“The car has a range of at least 1,000 km in the Netherlands, with enough space for four people, and is fitted with a specially designed navigation system.” 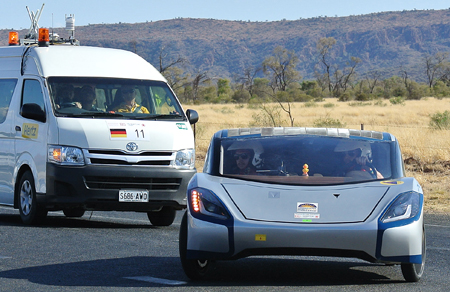 Next came Sun Riser (at left and below) entered by the German Team Bochum, runner-up in 2013. It is the sixth solar car built in Bochum and draws on a combination of all previous designed models.

The interior design is also advanced – stylish seats, sportive steering wheel with real wood veneer and carbon fibre optics.
The Cruiser category was introduced to the event in 2013 “to encourage innovation and invention that could be practically applied to the mainstream, one day ending up as a family car, less like a space ship,” says the spokeswoman.

“For the first time competitors had to think about catering to passengers, designing a vehicle with consumers in mind.

“To win in the Cruiser category the cars must complete the journey and be judged on time taken, energy efficiency and management, and passenger kilometers.

“They are then judged based on a range of practicality and design criteria, including innovation, design, handling of specific tasks such as manoeuvres, parking and boot space, and consumer desirability.”

Meanwhile in a double-Dutch contest, Holland’s Team Twente in Red One are battling it out with Nuon Solar Team who won a total of five times, including in 2013.

These front-runners are likely to arrive in Adelaide tomorrow.