Set to head from isolation to world fame 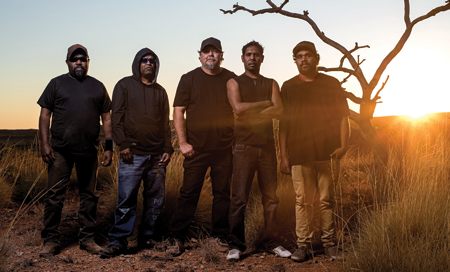 To be the most isolated metal band in the world is a surefire handle to achieve lasting fame, and Southeast Desert Metal from Santa Teresa made a huge leap towards that goal on the weekend.

Hills filmed for his new show “The Last Leg Downunder” which will be screening internationally early next year.

This is how Pirate puts the event into perspective:

The deserts of central Australia are a dry and brutal place.

Temperatures can soar above 50 degrees in the summer and drop below zero in the winter. The earth is scorched red.

The rocks here are painted with the symbols of secret stories. This is the home of the Arrernte people.

Hunters, warriors and healers. They’ve survived here through droughts, floods and an ice age. This is a land where people have danced in the dust and sung songs, passing down stories, for 40,000 years.

The most isolated metal band in the world, Southeast Desert Metal, are from Santa Teresa, a small Aboriginal community in central Australia.

The Eastern Arrernte band are hardened from many years of playing across the rigid Australian landscape. They’ve developed a sound that reflects their surroundings: dangerous and distinct.

After joining forces with Alice Springs based metal label The Black Wreath in 2013, the band released their first EP “Let’s Rock!” which sold out multiple pressings. They toured the outback and played many festivals, with an ever-growing legion of fans.

Influenced by heavy metal greats such as Black Sabbath, AC/DC and Iron Maiden, the band have created their own signature sound. The huge riffs and thumping grooves are delivered with passion and precision.

The technical lead work of guitarists Chris Wallace and Gavin Hayes holds its own with that of their idols.

Chief songwriter Chris Wallace writes about Aboriginal culture and dreaming, passing on stories from the old to the young generation. The band launched a film clip for the track ‘Eagle’ in September 2015, the first single from their debut album.

It was directed by cinematographer Wilson Bambrick (Psycroptic).

He quotes Chris Wallace: “In Aboriginal culture we have totems. And that’s my totem. I am that eagle looking down. It is something that represents us and the band. We are an eagle dreaming clan. We all follow that bird. Iron Maiden has Eddie, well, we have that eagle we follow. And that Eagle is a spiritual bird to us.”

Their debut, self-titled album was recorded with engineer Andy Kite at The Black Wreath studio. It features nine songs, structured with  meticulous care. The diversity of the songwriting styles shows the maturity of a band who are destined for big things.

There is no other band like Southeast Desert Metal. They are set to win over new fans and the old-guard of the metal faithful across the  world!