Trouble in CBD: Ranger or ambassador?

The town council is proposing to deal with “anti-social and harassing activities” in Todd Mall by employing an Indigenous Liaison Officer attached to its ranger unit.

An application for funding that the council is making to the Aboriginal Benefits Account (ABA) indicates the officer will get baton, firearms and “security operations” training.

Asked whether he has concerns the officer may be facing conflict arising from tribal, clan and family issues Mayor Damien Ryan said: “No. This land here is Arrernte. My preference would be to see an Arrernte man to take the position.”

It would need to be “someone with skills to work worth everybody whether they are from regional communities or from anywhere around the world”. Members of at least five major Central Australian tribes live in or frequent Alice Springs.

The Corporate and Community Services Committee chairman Eli Melky, who says he first raised the idea of an Indigenous Liaison Officer, says he would prefer for the funding not to come from the ABA, and he “would have an issue” if the position is restricted to an Arrernte man “although I am not a scholar on Indigenous protocols”.

He says his committee and the council are responding to “horrifying stories from people in Todd Mall, about violence, stealing, robbery. “Many are very desensitised by all this violence and are sometimes not even calling the police any more.

“Who that officer is should first depend on his or her qualification,” says Cr Melky.

“I would not oppose a white female. It needs to be an approach other than using a big stick, should be engaging, inclusive, warm and encouraging. The people need to be treated like human beings.”

Mayor Ryan says the officer would “do the same jobs as our rangers” and one of the main tasks would be “to liaise with shopkeepers and people within the Mall on a daily basis” working “not only with visitors from remote communities but also with visitors from other parts of the world”.

The council has not received an answer yet from the ABA but Mayor Ryan says the issue will be voted on by council at the end of the month and “we will find a budget line to support this”.

The committee said in a report tabled on Monday that the officer “will not just be performing regular ranger duties, but also focussing on the Todd Mall area to to help with preventing anti-social behaviour and to assist visitors wanting to know more about Aboriginal culture and the history of Mparntwe.

“It will be an ambassador role that will be invaluable in bridging the gap between Indigenous and non-lndigenous community members, as well as building cross cultural respect and social cohesion … employing non-confrontational methods through the use of the officer’s cultural experience.”

A proposal for an “ambassador” to work in the CBD was raised in 2006 in connection with the native title organisation, Lhere Artepe. UPDATED: Ambassadors Ian Stirling and Colin Tilmouth (pictured below) in roles very similar to those outlined by the town council’s application were actually employed in 2008 by Aboriginal Employment Strategy, then active in Alice Springs. (See story in our foundation archive, “Willing to get out there and give it a go.”) 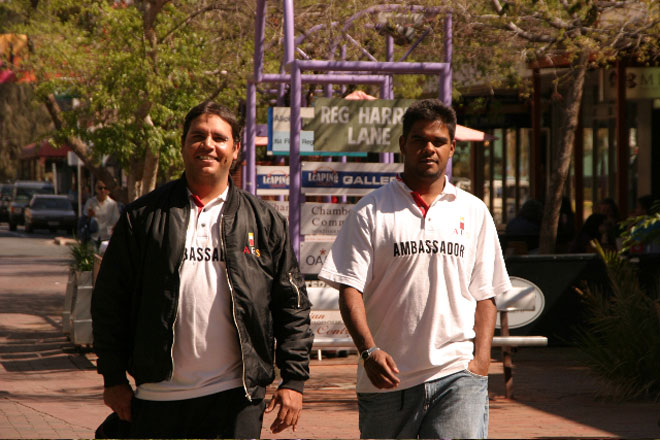