Home Issue 13 Incarceration of the young: where to from here?
Issue 13Issue 14Issue 15Volume 22

Incarceration of the young: where to from here? 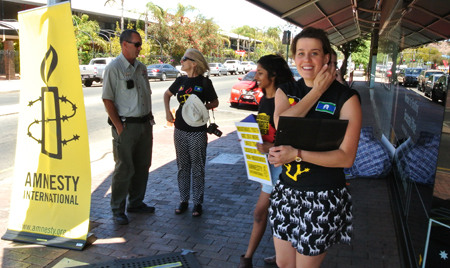 SA-NT president of Amnesty International Vicki Jacobs and two helpers came from Adelaide to Alice Springs to make a point on youth offending but fell foul of the law themselves.

OK. The town council ranger could have turned a blind eye as they had come a long way to raise awareness of an important issue.

But alas, the ranger didn’t, they didn’t have a permit, and so he moved on the trio from outside the office of Adam Giles in Hartley Street where they had wanted to protest about high rates of indigenous juvenile detention.

It sure wasn’t their day. A pamphlet they sought to distribute claimed that “across Australia children are held criminally responsible” from just 10 years of age instead of 12.

How many kids under 12 are involved in the NT, asked the Alice Springs News Online.

“At the Alice Springs Youth Detention Centre young people are only separated from the adult prisoners by a fence,” claims the pamphlet.

NEWS: They are separated by a fence.

JACOBS: They are not separated enough.

NEWS: How much of a separation do you think there should be?

JACOBS: We are advocating for justice reinvestment. Instead of putting money into having kids in detention, use that money as a way of keeping them out of detention, in the community. Do some restorative work as opposed to putting them in detention.

JACOBS: We are saying a large number of youngsters are put in detention.

JACOBS: What we are looking at with restorative justice is putting money spent on having kids in detention on having them not in detention.

NEWS: Is the offending rate as large as the incarceration rate, or is it not?

JACOBS: I don’t have the definitive numbers. [We advocate] working with those kids in the community so they don’t re-offend, and using that money to stop them from offending in the first place. Keeping kids in community, learning about culture, learning about family.

NEWS: Are you working with the parents to achieve that?

JACOBS: We’re asking the government to fund programs to do just that. Amnesty is not working with families directly because there are a lot of good services around.

NEWS: Is it not up to the parents, rather than services, to do that?

JACOBS: The justice reinvestment is to work with the juveniles so they don’t re-offend or offend in the first place.

NEWS: We have a string of organisations that aim to do just that, yet there seems to be an increase in offending.

JACOBS: That’s what Amnesty is trying to highlight. There is a really high incarceration rate.

NEWS: Because there is a high offending rate?

JACOBS: I don’t actually have the numbers on it.

And so the three campaigners pack up their pamphlets and posters and move on while the discussion keeps going ’round and ’round in circles.

A day later the police release the kind of statement the town has learned to dread: “Detective Senior Sergeant Peter Malley said a 39-year-old man was riding his bicycle in an easterly direction along Undoolya Road at around 10:10pm on Saturday, 3 October when it is alleged six males assaulted him.