Price wants council to do better than basics 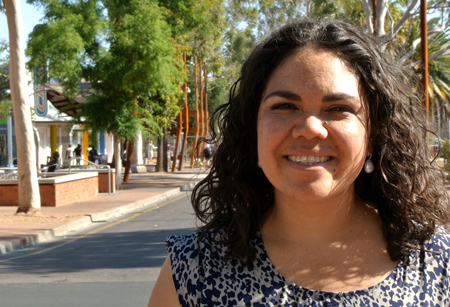 If candidate Jacinta Price (pictured in Todd Mall) gets her way the town council can look forward to a frantic 18 months – or more.

While she has respect for the three Rs (Roads, Rates and Rubbish), Ms Price says local government needs to go much further.

It needs to engage in improving youth services, join the battle against domestic violence, look further than sport in broadening recreational and creative opportunities, and be a robust promoter of local interests to the other tiers of government.

Ms Price, 34, is a self-made TV producer: With business partner Julie McAllan she has clinched a deal with a nation-wide television network, First Nation Experience (FNX), in the USA, for a series of 28 minute programs of Yamba Playtime starring Yamba the Honey Ant which she has been playing for eight years. (The image below is from the FNX website).

The series, hundreds of programs, is running for five years on the FNX channels in the United States.

The company also has a string of contracts with the NSW and Queensland governments for videos and live performances communicating health, hygiene and nutritional messages to children.

This includes work for the University of Melbourne trachoma unit, the Care for Kids ear campaign throughout NSW and Queensland, and touring a healthy living musical putting across “how to look after yourself” to school kids since 2011.

Under discussion with NSW are similar campaigns about domestic violence and child safety.

“Julie will be in Los Angeles this month to meet with FNX to discuss our healthy living roadshow and further broadcasting opportunities,” says Ms Price.

The 34-year-old mother of three and step-mum of one is the daughter of the CLP Member for Stuart, Bess Price, a Warlpiri woman. Her father, David, is of Irish ancestry. He has worked as a public servant, a teacher and in recent years for himself as a trainer and consultant. He is a frequent commentator in the Alice Springs News Online.

Jacinta Price was born in the Top End where her parents were teachers on Melville Island. They moved to The Centre when she was three years old.

Ms Price is fine singer, of soulful folk and hip hop, and a celebrated member of the Desert Divas who’ve performed here for several years.

Why is she standing for council?

“I’m very vocal publicly in Alice Springs and I’m passionate about what goes on in our community,” she says.

Her interest would be across the board, ranging from the business community to the Aboriginal community “because I want my mob to grow and prosper and take advantage of enterprise opportunities as well”.

Domestic violence and alcohol needs to be fought by “bringing people together, and getting behind and supporting organisations dealing with people who have an addiction”.

Ms Price says that task may well necessitate employing more council staff, or redirection of existing workers, and “Aboriginal people need to be part of that staff as well.

“Aboriginal people in town have always been behind the eightball in areas like that. I want to be able to let people know in town camps that they also have a voice.”

NEWS: What other things should the council to be doing?

PRICE: They have recently been given funding for youth activities. More needs to be done. From growing up in Alice Springs I know there used to be a lot more activities for kids. We had venues on Thursday and Friday nights, the Youth Centre, for example. We need more places like that, and better support those we already have, so kids can feel they are part of something.

NEWS: The council makes a big effort with sporting facilities. Are the arts taking a backseat?

PRICE: The Totem Theatre, I think, does a wonderful job [and deserves more support], so does the Gap Youth Centre, creating more dialogue between these places.  Being a musician, I was one of those kids who had that in me, to want to create music. I wanted to get out there and do something, because it was a positive way of looking at Indigenous youth and encouraging my peers to do the same sort of thing. But that was all off my own bat. It’s important for kids to know there’s support out there to be creative in their own specialised area, whatever it is they love to do.

PRICE: Certainly. If we can prove that something is working for our community and our kids, then obviously we can ask them to get behind it.

NEWS: Should the council be more forceful in making its demands?

PRICE: Absolutely. When we’ve got something that works here, and we’ve come together to make sure it does work, we should get that support.

NEWS: Given that the council can be a lobby for the people of Alice Springs, what would you say to the government now?

PRICE: Their recent support for youth programs is great. [There could be more support] for art which is positive in its many forms. Everyone can get involved in art. There’s a lot of support for sport, and that is wonderful, but the same kind of support could be provided to grow the arts, to grow music. We need something similar to Brown’s Mart in Darwin, a venue for local performance art, music, for growth. I’d like to see a performing arts academy. Right now to get these opportunities we have to go away from Alice Springs.

NEWS: It may bring kids back.

PRICE: Yes. Working in television I know producers of children’s TV around the country are having a problem casting Aboriginal kids. My company would support such an academy. We don’t just want to focus on employing Indigenous people in construction. Tourism is something we need to strengthen and we need to tap into the fact that it is Arrernte country, and the fact that this is a selling point. I think it’s wonderful what Doris Stuart is doing, she’s got tours up and running.

NEWS: Does the council steer away from big picture issues at the moment?

PRICE: I think they do. Having gone into business myself, I know that every little bit of support is helpful.

NEWS: Will the seat on the council, if you win it, be a springboard to a seat in the NT Parliament – in your mother’s footsteps?

PRICE: I know a lot of people would certainly love to see me go in that particular direction. It may be something that I certainly consider, down  the track.

NEWS: Should there be party politics in council?

PRICE: No. Each one of us is there as an individual, and we have to come together and work as a team.

NEWS: What’s your reading of the groupings in the present council?

PRICE: I’m looking at every councillor as an individual at the moment. I’ve had a lovely conversation and cup of coffee with Jade Kudrenko. I’m comfortable with Brendan Heenan and Steve Brown. Eli Melky and I have locked horns before but I think he’s a reasonable enough human being. They’re all reasonable enough human beings, to sit down and have a conversation about how can we work together to improve our town. I know I’ll have to make compromises at times, but it’s a matter of being level-headed and a team player. Chansey Paech and I have had differences in the past that we have been able to overcome. It all makes for honest debate in a democratic system.

NEWS: Does the council have close enough links with the other lobbies in the town, Chamber of Commerce, Tourism Central Australia, Congress and ALEC?

PRICE: There is always room for improvement.