25th Desert Mob: 'We all grew up together' 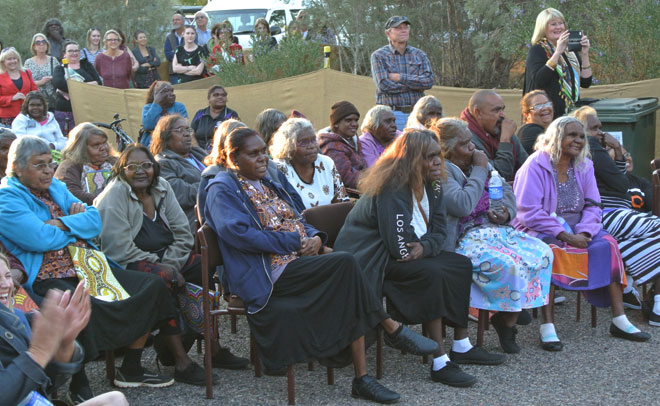 Above: Artists gathered in the forecourt for opening night speeches, thoroughly entertained by Nyurpaya Kaika-Burton, pictured below. 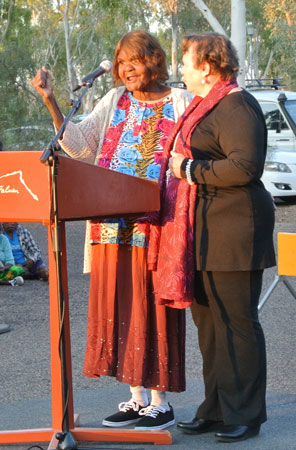 Even without translation there could be no mistaking how thrilled Nyurpaya Kaika-Burton was to stand on the podium and open the 25th Desert Mob. The artist works for both Tjala Arts and Tjanpi Desert Weavers. She may not be showing work in this year’s exhibition but she put her stamp unforgettably on the occasion, with the excellent translator Linda Rive at her side.

She described her fright when Araluen Arts Centre curator Stephen Williamson phoned to ask her to do the honours: “I took a step back and thought, ‘Wow, what am I going to say?’ I started to get the shakes, I felt a bit weak and then my strength returned and I said, no, this is going to be really great, I’m going to talk and talk up real strong and I’m proud about that.”

She knew she’d been asked because she’s a traditional owner for her culture and country, yet she was humble about that: “We’ve all come together here tonight as representatives of our own culture, our own places, and I’m just the one who happens to be here in front of you tonight.”

She spoke of the amazement and pride the artists feel when their works travel far and wide – “over the other side of the ocean, in the cities”.

She spoke of the role of art centres, in particular her own: “Our art centre is where it all happens, where culture is discussed and created and also most importantly 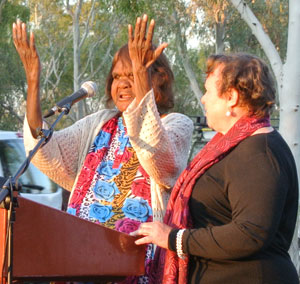 passed on to the younger generation. And it’s a place of work and employment and teaching for all of the young people who are the inheritors of our culture. So I’m so happy and proud about that, that it works so very, very well.”

She lifted her arms, up and up.

“We grew up, we all got better and better at our work and this whole Desert Mob and Desart has just become really big. Now look what a major event, what a major celebration this is on the calendar of the arts’ year.”

She finished with a rousing cheer and got plenty in return.

The exhibition inside rises to the expectation created by Nyurpaya. The art just gets “better and better”. Not evenly of course in this most democratic of shows, where emerging artists hang side by side with major artists, representing the output of 29 art centres from across the desert. But there are individual works that leap off the wall and overall a wonderful impression of vitality.

Above: Opening night crowd in Gallery Three, the Tjala ‘wall’ in the background.

Nyurpaya’s own art centre, Tjala Arts, based in Amata in the APY lands, shines, in particular the seven large-scale works that command the southern wall in Gallery Three. They radiate an intense energy, rich in colour. A circular collaborative, Seven Sisters, draws you in, as if into its own cosmos. It is by five women artists: Tingila Young, Tjunkara Ken (who has an individual work on the same subject), Freda Brady, Marinka Tunkin, and Sandra Ken. 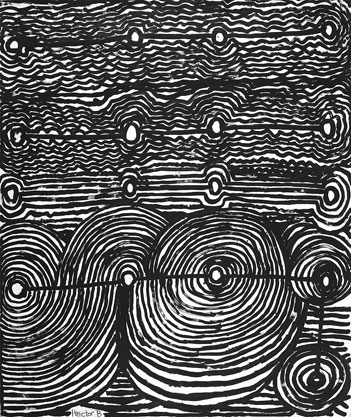 Ray Ken’s Tali creates a still point in the middle of the wall, with its daunting row upon row of sandhills. Singing alongside it are two works on paper by veteran artists Hector Burton (who has been such an ambassador for his community and art centre)  and Mick Wikilyiri. It is thrilling to see these artists switch medium with such aplomb, abandoning the intense Tjala painting palette for black on white, though Wikilyiri adds areas of watery wash. Burton has used every inch of his surface to express his ideas of the Anumara Tjukurpa (Caterpillar Dreaming), a subject he has often painted before (at left). Wikilyiri too turns to a core subject with his Tjala Tjukurpa (Honey Ant Dreaming), brushed with a marvellous looseness, contrasting large motifs and small, its jostling life giving way to free space in the bottom right-hand corner.

Tjala launched a book over the weekend, Nganampa Kampatjangka Unngu, Beneath the Canvas – the Lives and Stories of the Tjala Artists, coffee-table size, nearly three hundred pages, richly illustrated with their art and photographs of the artists and their country. Close to two hundred artists tell their stories in the book, a record for future generations, and for the outside world as well, of the astonishing drive of this generation to speak to their lives, times, culture.

Also in Gallery Three, at the eastern end, is the work out of Mimili Maku Arts, another APY Lands cultural hub, which triumphed with two awards at the Telstras this year. Robert Punnagka Fielding, who won the Work on Paper award for a photographic screenprint, consolidates his reputation as an artist working with photography. 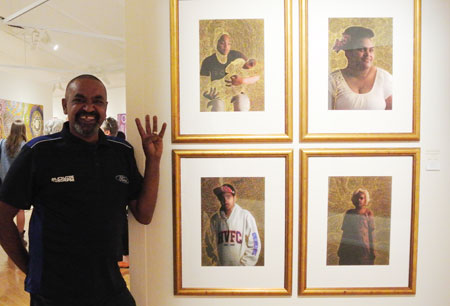 Milkali Kutju (Four daughters – one blood) is a hand-painted digital print presented as a quadriptych. The artist has photographed each young woman in a way that reveals her individual character and style but has lavished equally upon them all a jewelled surface of gold dots, as if he couldn’t love them enough. And if any doubt remained, gilt frames underline these daughters’ precious status.

The artist (at right) was present when I was looking at the work: “You love your children unconditionally!” he said, holding up four exuberant fingers.

Right next to his work is a photographic diptych (below) by Josina Nyarpingku Pumani. Its title, Ngayuku Ngura, refers to a place, Victory Well in English, but it is also a portrait of the artist’s parents. Contained within their image is the landscape of the title, a simple statement of the oneness that they feel with their country, realised with great delicacy. 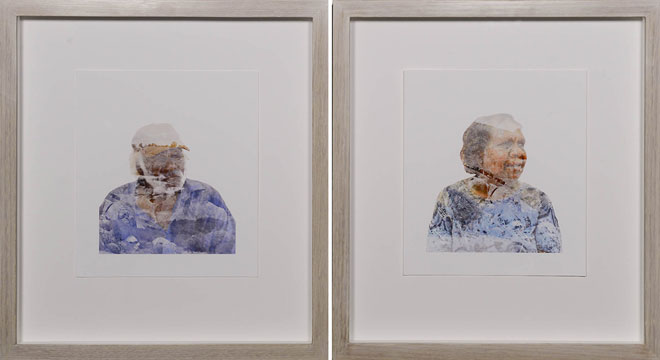 On the other side of this partition is Antara (Maku Dreaming) by Betty Pumani, a work on the same subject and similar in treatment to the work that won her the General Painting Award at the Telstras. Again the artist was present, being photographed in front of another large-scale work, also titled Antara, yet distinctly different, done in collaboration with her daughter, Marina Brown Pumani. It is fascinating to reflect on the productivity, the intensity of vision, the certainty in execution coming from this tiny woman.

In Gallery One Iwantja Arts dazzles with a display of extraordinary diversity. David Frank’s Policeman story hangs at the entrance. His treatment of this theme has shifted from the iconographic notation of the work he showed last year, to a narrative of devastating honesty showing encounters between police and Aboriginal people.

Vincent Namatjira continues his series on the explorer Captain Cook, after his very interesting portrait, James Cook – with the declaration, was acquired last year by the British Museum. In Desert Mob seven small panels (above) are presented as a single work, Cook’s story, showing his wedding, his ship at sea, two encounters with natives, interspersed with three portraits. Character, not verisimilitude, is the artist’s interest (at least when he paints), and he renders a rather sympathetic Cook. 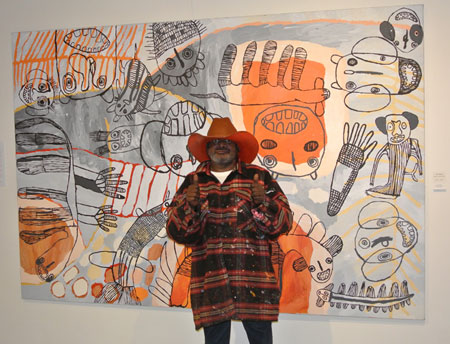 Tiger Yaltangki again treats us to a world of strange and wonderful creatures, Malpa Wiru (Good friends). They are free-floating, entering the picture plane from all directions, obeying no logic other than his imagination’s, yet the artist holds the work together with beautifully intuitive underpainting. He posed for a photo (left) in his freshly painted cowboy hat, toned perfectly with the work.

On the wall at a right angle to Yaltangki’s work is a more classical dotted map of country, Ngura, by Peter Mungkuri, in a glowing roseate palette, full of intricate detail. 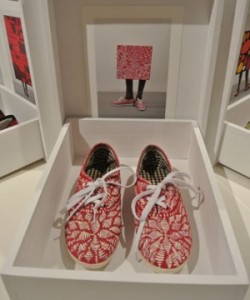 Not every art centre nurtures such diversity, but what Iwantja Arts achieves is like a microcosm for what Desert Mob as a whole has achieved over its quarter of a century, and what this 25th Desert Mob achieves across the range of work on display.

Ikuntji Artists have created a range of canvas ‘art’ shoes (Patricia Multa’s at right). The display works with a shoe shop-style installation, a photograph in the ‘lid’ of the box showing the original paintings, legs and art shod-feet playfully peeping out from underneath. (Ikuntji also have a satellite show in the gallery of the neighbouring Central Craft building).

Town camp artists from Tangentyere have a focussed showing of football paintings. Like Ikuntji they also have a satellite show in their gallery on Fogarty Street, with a new generation of Selfies, involving not only the core Tangentyere artists. There are some standout works from Hidden Valley artists, and interesting works too from young people, revealing the impact of street culture on the way they represent their identity.

Established painters at Tjungu Palya have forayed into work with the sculptural forms offered by reclaimed materials – Billynya by Angkaliya Curtis (at left) especially interesting with a form evoking both a lamp and a sail, and brushwork as detailed and intriguing as ever.

Tjanpi Desert Weavers Nora Davidson, Janet Forbes, Elaine Lane, Janet Lane and Anawari Mitchell have taken a found chair and conceptualised its function, in a work titled Pitja nyawa kulil (Come, look, listen). It stands like an invitation as you first enter Gallery Three – an invitation to exactly what you must do here at the 25th Desert Mob.


Below: Opening night in Gallery One, Hermannsburg Potters in the foreground.