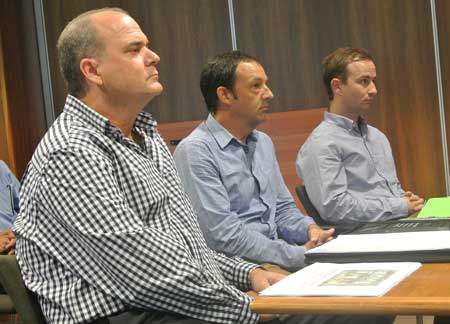 “Melanka remains unaffected” by Osborne Family Holdings Pty Ltd being placed into liquidation, according to a text message from Dean Osborne.

He says it was “a non trading company and was linked to recent issues” and he would be making a more detailed statement later today.

It remains to be explained what connection there is between the company now in liquidation, and Osborne Projects which Mr Osborne represented when he made a presentation to the Alice Springs Town Council late last year about the $100m residential and commercial project.

On June 12 we we quoted Mr Osborne as saying that the appointing of a receiver to the joint venture company Dabford Pty Ltd, in which Osborne Family Holdings is a partner, will have no impact on the high-rise proposal in Alice Springs.

There was an application to wind up Osborne Family Holdings Pty Ltd on July 29, and an administrator was appointed on August 5.

Administrator Kelly Trenfield, of FTI Consulting in Brisbane, says the company was handed over on August 21 to the firm Duncan Powell in Adelaide who are acting as the liquidators.

Ms Trenfield says Osborne Family Holdings were not trading nor acting as consultants at the time they sought to have an administrator appointed. She says this is usually done when the directors of a company have concerns over liquidity.

Meanwhile Dave Tollner, Minister for Lands and Planning, has approved the public exhibition of a proposed NT Planning Scheme amendment that will amend building heights in Alice Springs as it applies to Zone CB (Central Business), raising the height limit to eight storeys (34 metres) from thee storeys (14 metres).

A change of the scheme would be required to allow the Melanka project to go ahead.

The deadline for submissions is Friday, September 18.

Mr Osborne is pictured above (nearest to the camera) making the presentation to the town council about the Melanka project last year. He is seen with architect James Forbes and Zac Neck.

Receivers were appointed to The Avenue Development company Dabford Pty Ltd and the Property Holding company Hammer JV Pty Ltd on the 4th of June 2015.

As Osborne Family Holdings is a holding company and is not trading, and these shares and loans are the primary assets of the company and there is little chance of them being recovered, the Directors elected to put the company into voluntary administration. It has subsequently been placed into liquidation.

Other businesses within the Osborne Group are not directly affected.