$2m worth of faith in Alice 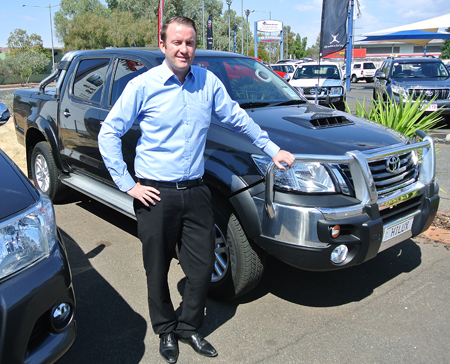 A $2m investment in a new showroom is a good indication of what the Kittle car trading family thinks of the future of Alice Springs.

Most people’s two major investments – houses and cars – have followed each other in a decline in 2013 and 2014, says Andrew Kittle, third generation car dealer in The Centre.

But now the trade has levelled out, he says, and the Peter Kittle Motor Company is expanding as it marks its silver anniversary.

PKMC used to have 80% of the vehicle trade – that’s four times as much as all other traders put together.
“These days it’s more like 70%,” says Mr Kittle.

“The market is a lot more saturated in Australia than it was five or six years ago. New brands have come on the market.
“We’ve rationalised down to four core brands – Toyota, Holden, Nissan and Mitsubishi. We’re no longer in the truck market.”

He says the market is “down a fair way from five years ago.”

He says he can see anecdotal evidence of a change of demographic, to a smaller population, older residents retiring, or moving away “to enjoy their twilight years”.

There is an uptick in government workers, and people from overseas compared to five or 10 years ago.

“We have some very good employees from countries such as India and Sudan,” says Mr Kittle.

The small business market has dwindled away from five to 10 years ago – but that time had been as good as Alice had even been.

“We can’t be too disappointed that it’s not at that level any more.

“While the market is down 10% from a couple of years ago, our numbers, for this dealership, probably have been improving from two or three years ago. There are swings and roundabout, as with any industry.”

The small car market has made a leap forward, people aren’t buying as many large sedans.

The big growth market has been 4×4 utes, small cars and SUVs (smaller 4WDs) “which didn’t even exist five years ago, let alone 10”.

The larger 4WDs have remained consistent, and they will, for the foreseeable future – Landcruiser, Prado, that sort of car, HiLux as well.

“Our mix at any given time would be almost 50-50, private and small business compared to organisations and government, such as NT Fleet and Central Land Council.

Mr Kittle says Alice Springs has always had expensive fuel: “When it went up it probably didn’t affect us as much as other areas in Australia.

“When it does drop people do cast their eye a little bit higher, to bigger cars.”

Part of the staff in the company is in a specialised field: “Sales is sales, you can transfer from one industry to another, but mechanics and technical specialists are a little bit harder.

“We identify the right type of person, rather than the person with the skills, and we train them up to the standard we expect. It has never been different in the 25 years we’ve been in business in Alice Springs.”

He welcomes government expenditure on infrastructure and as for his company’s “partial redevelopment” on its present site “we’ll hire local businesses to build it for us.”

Contractors are clearly doing well, says Mr Kittle: “Three or four I spoke to last week are looking for people because they have too much work.

“They are buying cars and getting them serviced.

“They are town based businesses but they have a mixture of town work and bush work.

“There are fewer small tradesmen. There are probably three or four larger businesses in town now that service this area.”

Photo: Andrew Kittle with a twin-cab HiLux 4WD – the type of vehicle which seems to have replaced the fast ute as the conveyance of choice for the young blokes.