There was method in the madness

As bureaucracy and political correctness are turning outback larrikins into an endangered species, the 100 local Rotary members staging Henley on Todd are thumbing their noses at those scourges, keeping alive the town’s brand of being unique.

The boat race has been run every year for more than half a century, had to be cancelled once because there was water in the Todd River, and is used as compelling evidence that Alice Springs people are mad.

Some spectators complain there is too much advertising in the event, but consider this: Adverts are usually clean, airbrushed, photoshopped, presented by people of immaculate appearance, flawless skin and deviating not one iota from the standard perception of good looks.

Henley on Todd advertising begins with an approximation of that but at the end of the naval battle the actors and the banners and signs are covered in flour, wet throughout from water cannons, and caked in multi-coloured powders from cannon fire. But as all this goes on television world-wide, it’s probably the best deal any advertiser can buy.

To run the event, earnest citizens are abandoning their accountants’, lawyers’, teachers’, public servants’, electricians’, builders’ and God knows how many other desks or utility trucks and turn into Vikings, Navy sailors, pirates, and other types of boat people.

An unusual event? We haven’t even started talking about Henley on Todd being a dry boat race.

About 100 members of the three local Rotary clubs run HOT, as it’s known by them, on the day.

They work around 12 hours each. If the enterprise was charged out at the rates of their day jobs, the cost to stage HOT would be in the tens of thousands of dollars.

Then count the thousands of man-hours spent on planning, fixing of props, canvassing for sponsorships, getting permits and a myriad of other things over months of preparations, and you’d be getting close to the cost of an average Australian Royal Commission.

But the members of the service clubs staging HOT get no cash. They don’t employ anyone who does. Neither do outside helpers such as St John Ambulance and Emergency Services volunteers.

HOT workers get their rewards from doing something with mates which is a pretty good thing for the town – and from letting their hair down in the process.

In their horned helmets and fur attires grown men and women from the Viking ship run up to hapless tourists watching the parade in the Mall, hollering menacingly and brandishing their assortment of weapons.

It works. This year’s main sponsor was Assa Abloy. This trade name may sound obscure but if you’ve walked through a door lately you’re likely to have walked past one of their products: Locks – ranging from Lockwood to Yale.

Guests of the naming rights sponsor getting into the swing of things.

Nick Penny is the marketing director of Assa Abloy Australia. Its relationship with HOT, as an event to treat their favorite clients to, started 11 years ago.

They strayed briefly to the V8s in Darwin, saw the error of their ways and were back again this year, joining dozens of advertisers who have succumbed to canvasser Dale McIver’s silver tongue.

“We talked to Rotary last year about the causes,” says Mr Penny, “and fighting trachoma is something we wanted to be involved in, as we can make a difference, and show we’re a good social company, giving back to our local environments we’re proud to be part of.” 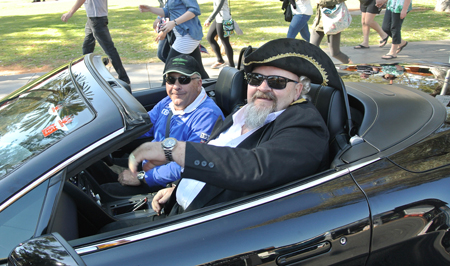 The other reason was the opportunity of “bringing top customers here to have a bit of fun, in this unique location and with this unique event.”

At right: HOT Commodore Peter Nankivell getting a lift in an Aston Martin.

Assa Abloy brought 117 of them this year.

“It’s one big event for the year for a lot of our big customers,” says Mr Penny, asked what it was that brought them back to The Centre.

“They are finding the place quite stunning.

“It’s a perfect place to have a conference. It’s dead centre. It’s one flight from most capital cities, and the facilities are equal to what we’ve seen in the capital cities – and probably more accessible, to be honest.

“And there are l 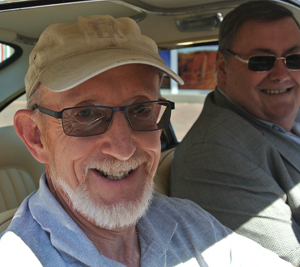 ots of activities we can partake in. It’s a win-win for everybody.”

Phil Mitchell (pictured with Mayor Damien Ryan) puts a new spin on the concept of grey nomads: Like more than a dozen fellow owners of the glamorous marque, he came in an Aston Martin sports car (below, right), the kind that was made famous by James Bond – or was it the other way ’round? 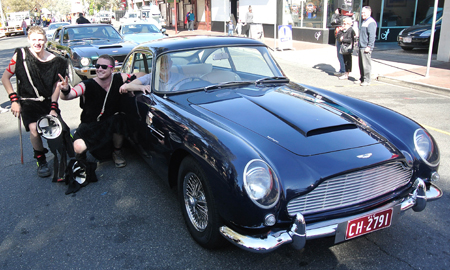 He had it up to 140 miles an hour – that’s 225 km/h. Will he put the pedal to the metal on the unlimited speed section north of town?

How fast will he go?

“Let’s wait and see, but certainly 130 miles an hour.” What’s this kilometer business?

Gabi Hollows (pictured), widow of the legendary eye surgeon Fred Hollows, was at the HOT to lend perspective and gravitas to the choice of the major charity for the money being raised: The fight against trachoma – still a problem in the NT.

“It’s like coming back home for me,” she told the Alice Springs News Online.

“We had our base camp at 75 Hartley Street many years ago when we were doing the National Trachoma and Eye Health Program. Fred and I had many, many good times here.”

It was Dr Hollows’s earliest work in Central Australia. They went to 365 communities, treating or examining 112,000 people in the mid-seventies, starting with an old Gurinji lady at Lajamanu where Vincent Lingiari came from.

“Now we put in inter-ocular lenses, and the Fred Hollows Foundation manufactures those to the highest standards.”

The not-for-profit now works in 26 countries, and has manufactured six million inter-ocular lenses used in 65 countries.

“We still have active trachoma in Australia and that should not be, and that’s all about health hardware, elevate, ventilate and separate, hot and cold running water,” she says.

“You’ve got to keep banging away at it.

“Some of the people we see today may not be going blind from trachoma, but from diabetes and renal failure and then maybe from their cataracts.”

Trachoma by its old name, sandy blight, a huge scourge throughout Europe, was eliminated there in the Middle Ages; 100 years ago it was eliminated in America.

There is still a lot to do, says Ms Hollows.

“Many of the people in these communities had their lids flipped by the eye doctors as little kids. We’ve been working in this country now for nearly 40 years.

“Now we want to talk about tucker. If you eat white man’s poison you’re going to get crook.

“We now have 130-odd Indigenous graduate doctors nation-wide. Fred would be so excited if he knew that was happening today.”

Watch the video of the Viking boat catch fire:


PHOTOS below:
• Mob with a message in the parade.
• The battle ships in all their fury.
• Better red than dead.
• The Aston Martin drivers crash at the finish line – in a HOT boat, fortunately.
• Not in a HOT mood: Council rangers issued fines after the parade on Saturday morning for drivers parked at the council chambers in the spot reserved for Mayor Damien Ryan, who was at the regatta getting ready for his role as one of the commentators, and for CEO Rex Mooney, who was also at the HOT entertaining the arriving crowd as a member of the band In Tatters. 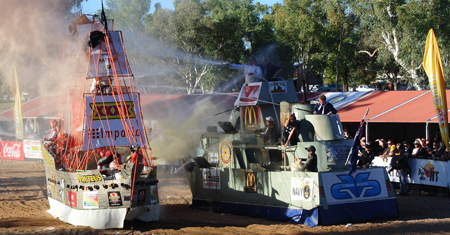 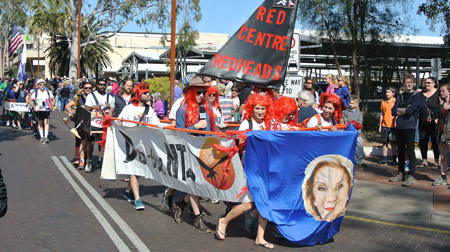 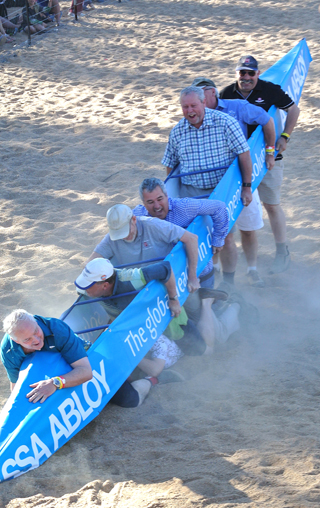