Government water research: a drop in the ocean? 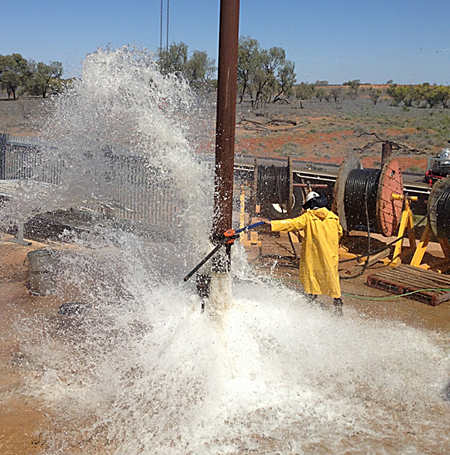 An allocation of $2.4m over four years in the 2014 Territory Budget for exploration of water resources is being spread over nine regions.

Vocal water campaigner and Alice Springs Town Councillor Steve Brown says: “That the amount is meager, but it is a start, an indication at least that Government is starting to give some thought to the necessity for this kind of resource investigation and management.”

A Department of Land Resource Management spokesperson says the allocation is “to conduct land and water suitability assessment across the NT, with a view to finding land suitable for agricultural production, with the co-existence of appropriate land and water resources.

“Drilling activities have also been undertaken in the Mataranka area and Dunmurra.

“This a major investigative program targeting prospective land areas on a range of tenure types, including pastoral and Aboriginal land, and will contribute significantly to development of the north.”

In reply to a question from the Alice Springs News Online, “how many holes will be drilled in the southern half to the NT, and where,” the spokesman said: “Putting a definitive number on how many holes will be drilled is quite difficult as drilling teams make assessments of on ground drilling requirements when conducting fieldwork dependent upon landscape features and drilling results as they emerge.

“Needless to say, the number of bores will be significant given the locations and extent of the program.”

Cr Brown says the issues are “now especially relevant because of the Develop the North strategy from the Federal Government.

“I’m certain that the NT Government will eventually realize that all development is resource driven and only a large and well funded effort to seek out and log the available resources, along with their potential sustainable harvest, can drive increased northern development.

“I believe the present allocation is for a drilling rig that will allow exploratory drilling by the department.

“This is useful, sure, but in reality a hell of a long way from the sort of effort you would expect given the push from Canberra.

“Hopefully that will change when the realization eventually dawns that to make development happen you have to start at the beginning.

“Incidentally, given we are talking about water resources, a recent indication from a satellite based magnetic field mapping study published by the ABC’s Country Hour suggest that the Amadeus Basin had “recharged” significantly after some larger rainfall events in recent times.

“If further research can prove this to be the case then the potential for further development in this area takes a quantifiable leap to something well above current expectations,” says Cr Brown (pictured).

“We are more than likely sitting atop an enormous wealth creating opportunity and the only way we are going to know that for sure, is to do the research.

“So come on, Governments, put your money where your policy is, spend some money. Drive development through research.”